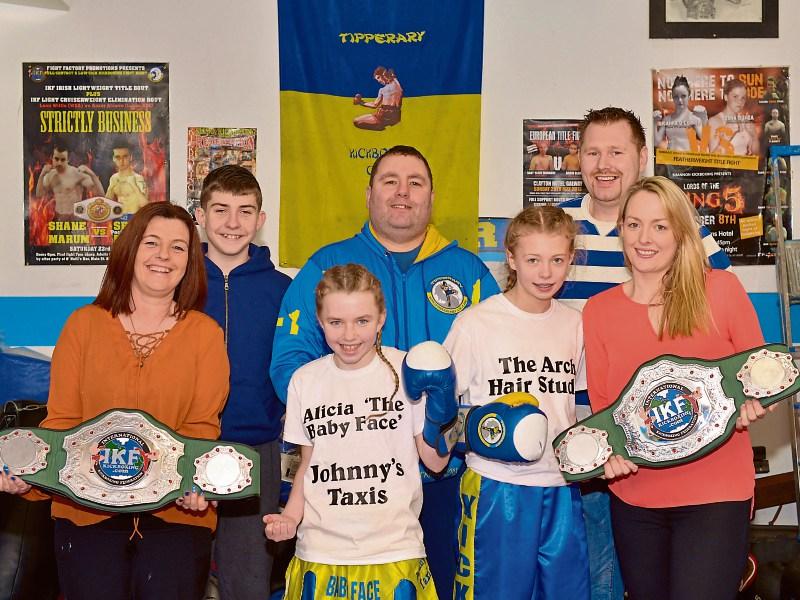 The Tipperary Kickboxing club is celebrating another huge success with wins at the Irish Kickboxing Federation (IKF) championships held in Waterford last weekend.

Alisha, from Tipperary town was up against a taller Amy O’Keefe from Waterford’s Billy O’Sullivan School of Kickboxing in a five-round fight. She won the first two rounds before upping her game again to another level to go on and win the next three rounds.

“From all the training I was confident going into the fight but also nervous. When I won I was so happy I jumped up into Coach Craig’s arms,” said Alisha.

Alisha’s family were there in full support and her mother Linda described how she felt before the fight. ““I was a bag of nerves and an absolute wreck... the more progress Alisha makes the more you don’t want to see her lose because so much effort, training and commitment goes in and you don’t want to see your little girl disappointed. When she was announced the winner I can’t describe the feeling... I’m just over the moon, estactic and happy and relived and a whole mixture of great emotions – I’m just floating on air... all her hard work paid off and we are so proud of her.”

f. This young talented athlete won the World Championships in Italy in 2014 at aged 10 and she has two IKF National Championship titles for 2014 and 2015.

Tweleve-year old Shannin O’Dwyer from Glenview Square Tipperay town competed for the IKF national title for the first time and won. She was up against Leah Murphy from New Ross and again Shannin’s fitness and technique shone through.

“ When I was announced the winner it felt brilliant and I jumped up in the air,” said Shannin. “I felt all the hard work in training paid off.” Shannon is also a talented cross country runner and won a title at County level in 2015 with her school team St. Michael’s Girls N.S.

Shannin’s mother Angelina and her family travelled to Waterford in full support of her daughter. “I felt so nervous before the fight and didn’t know what to do with myself. When she won, it was the best feeling in the world.”

At the IKF tournament on Saturday night coaches from other competing clubs congratulated Craig Sutton, coach to the Tipperary Kickboxing club.

“ I’m so proud of all the fighters. For me, personally, I get great satisfaction out of seeing the fighters train hard and do well for themselves.” said Craig Sutton.

The Tipperary Kickboxing club had four other fighters in the under card fights clocking up another three wins. 19-year old Aoife Peters from Kilmoyler won her 69kg fight, 25 year old Sean Birrane from Monard won the 87kg and 21-year old John Paul McCarthy from Cappawhite fought and won the 67kg. Tom Ryan from Oola had a hard 120kg fight but lost out this time.

The Tipperary Kickboxing Club wish to thank Shauna Fahy and Sandra Moloney for braiding Alicia’s hair and to the seventy supporters who travelled from Tipperary town to the tournament s. A special thank you to sponsor Johnny’s Taxis who came on board in 2015 to sponsor Alisiha and has continued his sponsorship in 2016 and Arch Hair Studio who sponsored Shannin. The Tipperary Kickboxing club are looking for sponsors for 2016 so please contact the club. Well done and congratulations to the club on another fantastic achievement.