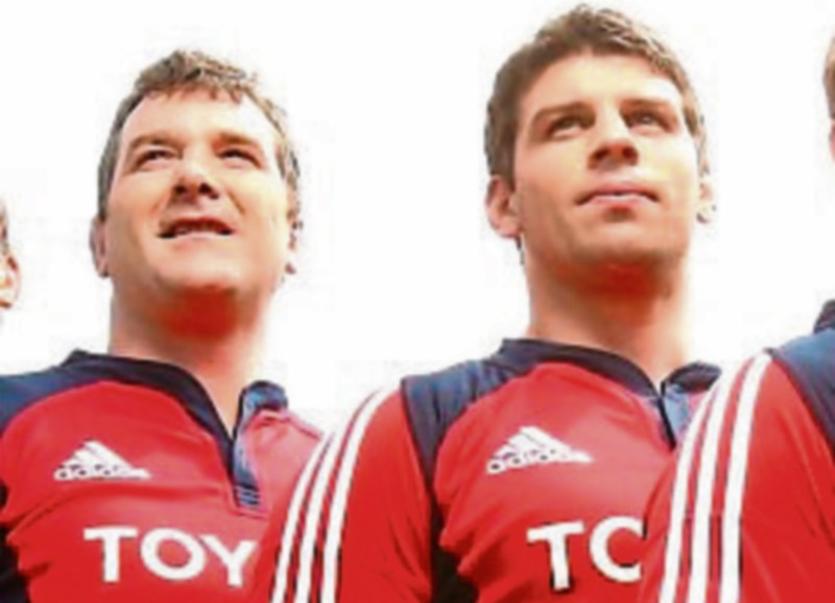 Munster's Anthony Foley and Denis Leamy when they played together.

The sudden death of Munster Head Coach Anthony Foley, in Paris last weekend, has left his family, friends and supporters in deep sadness.

Cashel’s Denis Leamy was a Munster Rugby team mate of ‘Axel’ Foley and he spoke to The Nationalist this week about his sense of loss and the deep respect and friendship the men shared.

Growing up in the 1990s Denis watched Foley play and when they came to share a team dressing room as Munster players they became friends.

“I remember him as being a massive person, someone who filled the room. We always got on very, very well. I had a huge amount of respect for him and I’m saddened and shocked by his death.”

The tragic news reached Denis as he was preparing to watch the much anticipated Munster v Racing 92 European Champions Cup match, last Sunday.

“With Anthony Foley you won’t be short of highlight reels – he was a part of really great teams. It wasn’t  by accident success followed him around. Teams in St Munchin’s, Shannon, Munster and Ireland had a lot of good players but Anthony was to the forefront. He was an incredible player, scored some fantastic tries.

“His leadership was fantastic. For a young player like me, when I came into a Munster side with household names, he never really said a lot but he’d give you a nod or a wink that would lift you.”

Although the two men didn’t meet often in recent years, when they did Denis said Anthony always “met me with a slag and a smile. He was great company, very funny. I will miss that.”

Read the full interview in The Nationalist – on sale tomorrow.

Books of condolence for Anthony Foley have been opened in five County Council offices across the county – Clonmel, Carrick on Suir, Tipperary Town, Nenagh and Thurles.