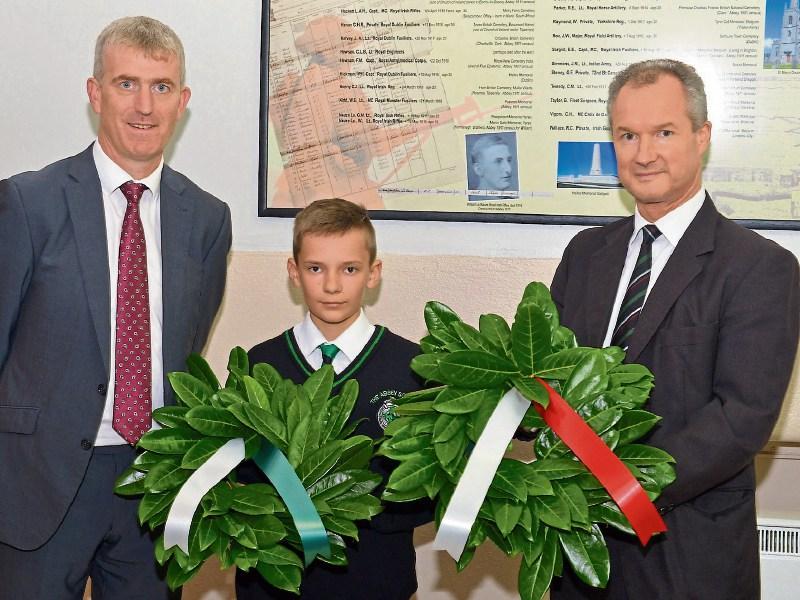 Principal Abbey CBS John Kiely with the youngest pupil in the school Igor Mikula and Andrew Forrest, Principal High School Rathgar who laid wreaths at the Abbey memorial to the forty men wh

A Tipperary school has taken another step as part of a  journey to embrace a unique history.

A poignant commemoration event was held at the Abbey school in Tipperary Town to unveil a memorial to forty past pupils of the Erasmus Smith Old Abbey  Grammar School which operated on the same site  from 1680 up to the Irish Civil War who died in the Great War.

The ceremony marked  another special day in the history of the school   located on a site that has been a centre for  religious and educational activity for over 700 years.

Pupils participated in a moving ceremony with  music, poetry and readings from the era performed.

Historian Dr. Des Marnane addressed the pupils and invited guests  on the sacrifices of the forty men  and a memorial was unveiled in their honour.

The memorial was unveiled by  Andrew Forrest, Principal of the High School Rathgar, an Erasmus Smith school, with a shared history with the Abbey.

It was another milestone for the Abbey which in recent years  have conducted a number of ceremonies to remember its past.

Those events included  the unveiling of a plaque by President Mary McAleese to mark the site of the Old Abbey Erasmus Smith Grammar School, the unveiling of a plaque in  h onour of John McCarthy, a past pupil of the Old Abbey, who was present at the meeting in Thurles when the GAA was founded, and in 2006  an archway to commemorate the Augustinians  and their rold on the site from around 1300 was officially opened.

Those commemoration events were described by  the Abbey Principal John Kiely as  part of a journey embarked upon by his predecessor  John Heffernan.

“This is another step in the journey we have been on for the last twenty years of revisiting our past. This is a timely reminder that there was a Grammar school and that past pupils fought and died  in the Great War. It took us a long time to get to this poin.  It is a very proud day for the school. It is the right thing to do, it shows the confidence within  the school body that we can take that step” said Principal Kiely.