Clonmel's rugby team extend lead at the top of the table 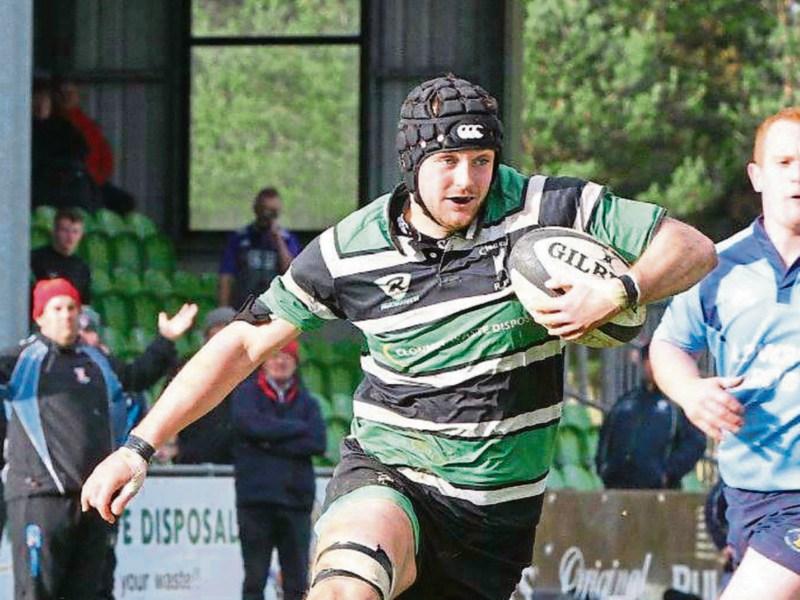 Clonmel's rugby team remain firmly on course for a third Munster Junior League First Division title in-a-row, after they travelled to West Cork on Sunday and returned home with a 22-5 win over Clonakilty.

Tries from Tony Cantwell (pictured above) and Greg Carroll and a Dylan Cadogan conversion gave Clonmel a 12-0 half-time lead.

Dean Slattery and Robbie Carroll added further tries in the second period to secure the bonus point. Shane Scannell scored a late try for the home side.

The win extends Clonmel's lead at the top of the table after Clanwilliam, who were second, lost ground when a late penalty try denied them victory at Galbally, as they went down 25-19.

Another Tipp team, Kilfeacle, lost at home to Richmond 21-14. Tries from Charles Walsh and Diarmuid McCarthy, both converted by Shane Looby gave Kilfeacle a 14-12 half time lead.

However Richmond rallied strongly in the second half to secure the victory, with Brian Mullins kicking seven penalties for the visitors.

Nenagh's Donncha Ryan, meanwhile, was part of one of the biggest sports stories of the year when he played on the Irish rugby team that defeated the All Blacks for the first time.

Ireland's famous victory, their first over New Zealand in 29 attempts, was achieved on Saturday night with a 40-29 win in Soldier Field in Chicago. In response to the Kiwis' performance of the Haka, the Irish players lined up in a number eight formation in an emotional tribute to the former Munster and Irish great Anthony Foley, who died recently.

The 40-29 scoreline at the final whistle had a perfect symmetry for Ireland when they were beaten by the All Blacks by the same scoreline fifteen years ago in a team that included Foley.

In Division 2A of rugby's All-Ireland League Cashel had a tonic 22-14 away win over Belfast Harlequins.

In other sport Clonmel boxer Con Sheehan won his fourth bout since turning professional when he defeat Poland's Kamil Sokolowski at the Titanic Exhibition Centre in Belfast on Saturday night.

"Got the win last night, wasn't myself but great learning curve...big thanks to the main man @peterfury and everyone for all the support", Sheehan said on Twitter as he paid tribute to his trainer Peter Fury.

In GAA, meanwhile, Fethard completed the South and County Intermediate Football double when they beat Fr. Sheehy's by 0-16 to 0-9 in Saturday's South Final in Cahir.

A fortnight previously they defeated Golden/Kilfeacle in the county final.

However Thurles Sarsfields saw their prospects of reaching the Munster Club Senior Hurling Championship Final blown apart when they were defeated by Clare champions Ballyea after extra time in Sunday's semi-final at Cusack Park in Ennis.

With Padraic Maher, Pa Bourke and Aidan McCormack to the fore, the Tipp team were in control for much of normal time. But a late rally from Ballyea, inspired by Tony Kelly and a late goal from Clare football star Gary Brennan, forced the game into extra time.