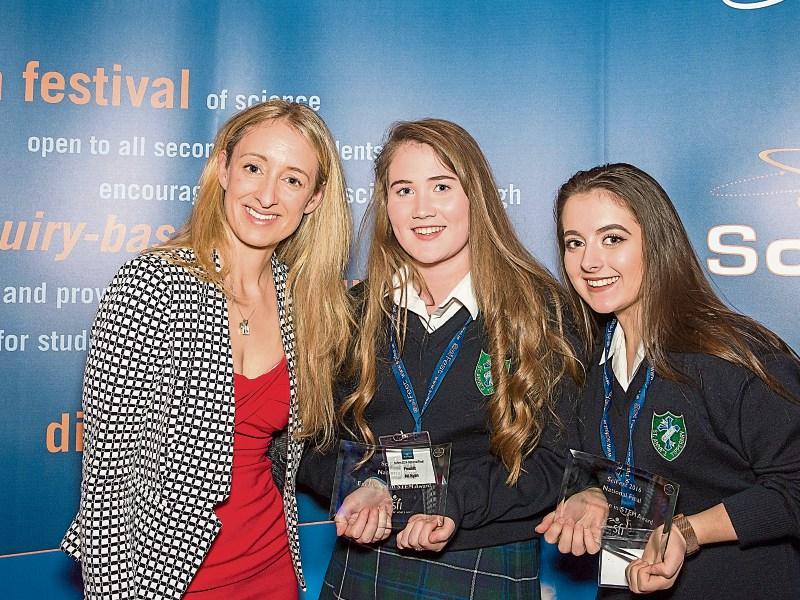 Katie Kinane and Ali Ryan, students from St Anne’s Secondary School, Tipperary competed among the top young scientific minds at SciFest 2016 and were awarded an Excellence in STEM award, for their project “The Mechanics of Pencil Holding”.

This year saw a record number of over 8,000 students exhibiting their projects in local and regional science fairs across the country.

Katie and Ali were two of the 58 students who went on to exhibit their 31 STEM projects at the national final held in the Marino Conference Centre in Dublin.

Katie and Ali identified the ideal technique for holding a pencil and developed a simple and inexpensive way of correcting those who use incorrect techniques.

They gave students a glove developed for this purpose, leading to 60% of students using the incorrect technique to improve their writing style, placing less pressure on the tip of the pencil and gaining greater control of the pencil. They identified that those who developed the correct technique at a young age were more likely to persist with it throughout their lives.

Sheila Porter, SciFest CEO, said: “The standard at SciFest is always extremely high and this year is no exception. All the students put in such a phenomenal amount of work and it is very difficult to pick a winner. The range of projects, and the creativity and innovation on display this year is really heartening and demonstrates that the students of today will be tomorrow’s leaders in the area of STEM. The aim of SciFest is to foster and develop a love of STEM, and to imbue every student with the skills of self-directed learning. In that regard, this year has been a huge success. I look forward to seeing the winning project go forward to Intel ISEF 2017, where I am sure it will do very well.”

Congratulating the students on their achievements Richard Bruton T.D., Minister for Education and Skills said: “My department is committed to increasing the take-up of gateway subjects to STEM in schools and to encourage a passion for STEM among students. This is one of the aims the Government has in its Action Plan for Education. Events like SciFest are invaluable in this regard as they give all students an independent love of STEM, outside the classroom. I had the opportunity to view the projects on display today and all the young scientists here today are a credit to their families and supporters. The future of STEM in Ireland is clearly very bright. The standard was incredibly high and I wish hearty congratulations to the winning entry on the success achieved.”