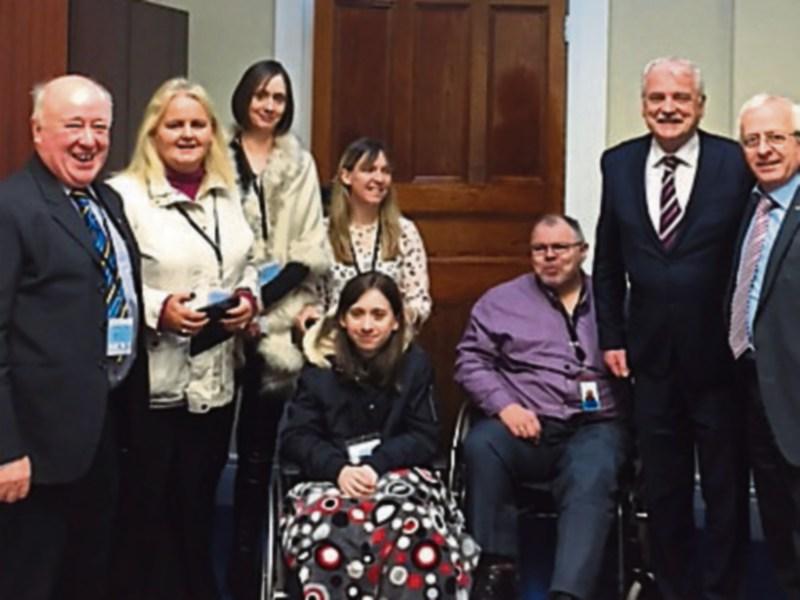 Killenaule carer Maggie Butler met with Minister of State for Disability Issues Finian McGrath yesterday, Thursday 17 November, about introducing a revised version of both the mobility allowance and motorised transport grant schemes so that her son Alex can continue attending school and hospital appointments.

Five year old Alex Butler, a twin to Adam, was born at 27 weeks. He has spastic quadriplegic cerebral palsy, epilepsy, sleep apnea, vision impairment and is tube- fed. Alex spent last Christmas and New Years in Temple Street Children's University Hospital on a ventilator fighting for his life.  He requires 24/7 care, can’t travel in a car seat and needs to be accompanied by a nurse.

South Tipperary Carer of the Year Maggie Butler was accompanied by councillors Richie Molloy and Imelda Goldsboro and Deputy Mattie McGrath at the meeting in Leinster House. Cllr. Molloy highlighted that people who applied for the grant before it was abolished in 2013 are still in receipt of the payment, whereas new applicants such as Maggie Butler are not even allowed to apply.

Minister Finian McGrath acknowledged the challenges the Butler family face on a daily basis, and said he was hopeful that the necessary legislation would be passed by Dáil Éireann early in the new year.