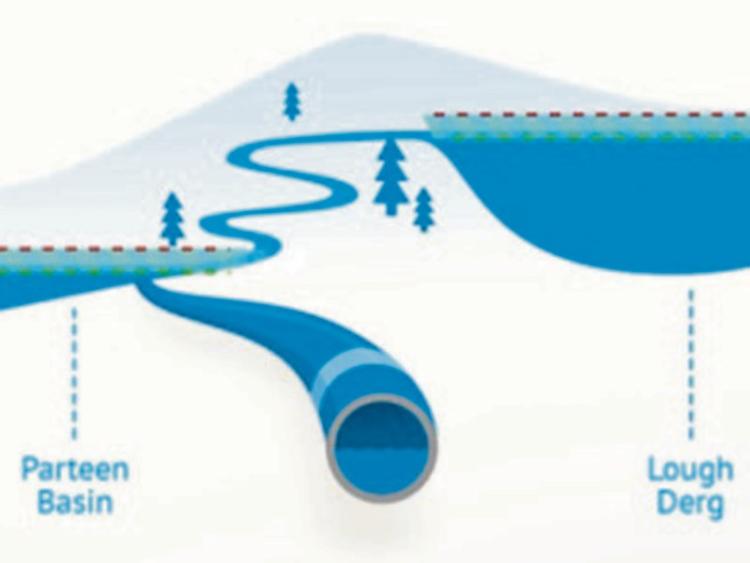 Irish Water held two days of consultations in Tipperary last week to explain its proposal to take water from the River Shannon and pump it to the East Coast, Midlands and Greater Dublin Area.

In one of the biggest infrastructural projects since the Ardnacrusha power station scheme was built in the 1920s, Irish Water plans to take 330 million litres of water per day from the Patreen Basin below Ballina and pump it to Peamount outside Dublin.

The €800m plan has already run into opposition from local farmers, local politicians and the River Shannon Protection Allianec,a group of community activists and environmentalists.

The project, which is expected to go before An Bord Pleanala in 2017, will see a treatment plant built at Birdhill with water then being pumped uphill to Cloughjordan before allowng it to fall by gravity to Peamount.

The proposal was first mooted in the 1990s and was seen purely as an answer to Dublin's water shortages. Initially it was to have been located at Lough Ree outside Athlone, but it moved to northeast Lough Derg because of political pressure.

With further objections to Lough Derg as its source, the poject has since moved to Parteen Basin.

Part of the objections from the RSPA was the unknown damage taking so much water from Lough Derg could cause to the local environment. It was also pointed out that the Shannon had not run its course and because it is a slow moving river, bays and inlets on Lough Derg could see no water movement leading to silting and other damage.

However, an Irish Water spokesperson told the Tipperary Star at last week's consultations that the project had been moved to its present location because its overall aim had changed and Parteen was the correct spot.

“This is not a Dublin project. It is a national project,” the spokesperson said. “It was moved because it was the best option.”

They pointed out that initially, the proposed pipe required for the plan was to have been 100km, then it was 120km from Lough Derg, but would now be 170km.

The extra cost would not be justified if it were not the right thing to do, they maintained. And, at that point, the Shannon would have run its course.

“This is needed, not just for investment in Dublin, but throughout the Midlands and other areas,” they maintained.

The project allows for trunk pipes to be taken from the main pipe and these would serve areas where industry wished to locate. It is not Irish Water's remit to bring in industry to any area but to make sure industry is supplied with water.

The spokesperson was also at pains to point out that the amount of water to be taken was 2 per cent or 330 million litres and that abstraction would come from water already being used by the ESB at Ardnacrusha.

“We can't touch the amount of water that must go down the River Shannon through Limerick and out to the sea. Where we can take it is from the water needed by the ESB. The amount of water available to them will drop,” the spokesperson stated.

The ESB will have to be compensated for its loss of generating capability.

However, the biggest obstacle Irish Water will have to face would appear to come from the farming community, and despite having met the likes of the IFA and the ICMSA, many remain unconvinced their liveliehoods will not be detrimentally affected.

“This is the first time landowners will have had a chance to see what is proposed at first hand,” said the spokesperson of the consultation process.

They had had a good number of farmers attending over the two days.

“Most came to learn for themselves what it would mean. The discussions were meaningful and robust,” said the spokesperson.

“We are following the best practice of Bord Gais who have a wealth of experience over 40 years dealing with issues affecting farmers,” said the spokesman. “They have had very few cases that could not be resolved.”

Irish Water will need access to land owned by roughly 500 farmers for the pipe to be built. There will be an initial 50 metres for construction work, with permanent access required for maintenance etc.

Irish Water is pledging to work with farmers to make sure they will not be adversly affected by agreeing compensation for any loss of income, the renting of land if that is required, and guaranteeing that any future losses or adverse effects will be in taken care of.

However, if a compulsory purchase order is required, the landowner will receive just a once-of payment.

When it comes to reinstating farmland, Irish Water could understand why farmers may have concerns having been left with a bad taste in their mouths following the construction of the M7 which split some farms, while roads were not always left in good condition.

They have, however, received a positive response from angling and tourism providers, especially as many could see facilities improved under the company's community gain funding, which could be administered through Tipperary County Council as lead agency. They would also hope to right some of the difficulties anglers were still facing following the building of Ardnacrusha going back nearly 90 years.

“We are also looking at up to 1,000 jobs over the three to four-year construction phase, with 30 to 40 permanent jobs at Birdhill treatment plant,” said the spokesperson.

As well as that, it is intended to open the tendering process up to local businesses so that they can supply materials during construction.