Slalom course puts Clonmel on the map for river activities 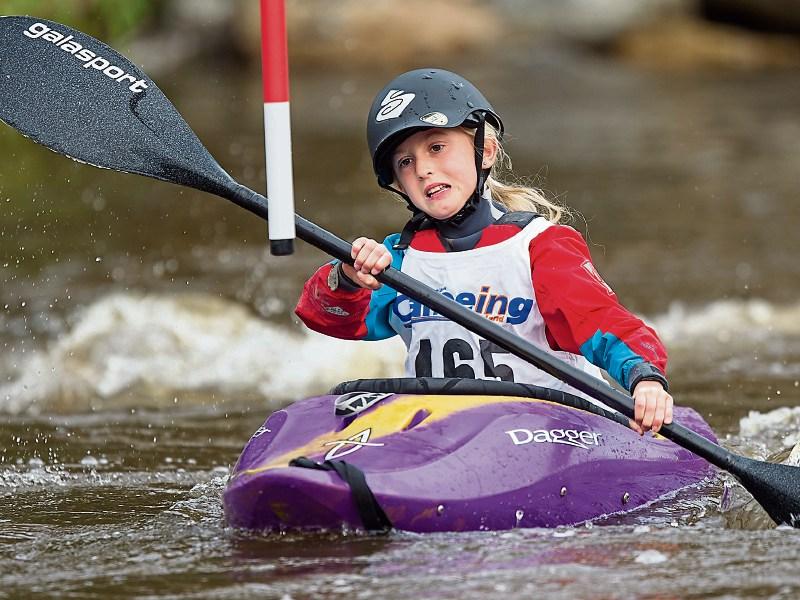 A weekend of canoeing by people of all ages a fortnight ago marked the completion of Clonmel's new slalom course, which according to Sports Partnership co-ordinator Valerie Connolly has put the town on the map as a centre for river-based activities.

Twenty five gates were hung by members of Canoeing Ireland's slalom committee, who joined with the Tipperary Sports Partnership and Clonmel Canoe Club representatives to put the finishing touches to the 300 metres-long course, which runs from Lady Blessington's Weir to the Denis Burke Park.

On the following day some of the Irish squad members trained on the river while testing the course, which is the first of its kind in the south east and an amenity of national importance. It also includes a river play area for canoeists and kayaks.

Then on Sunday races in different divisions and standards were held, with many locals trying the sport for the first time in the novice event.

"It was a fantastic weekend", says Valerie Connolly, sports co-ordinator of the Tipperary Sports Partnership.

"It was great to see the course completed after eighteen months of work and when the gates were hung it brought it all together.

A lot of people came down over the weekend to watch the canoeists and people were inquiring about the sport. 36 people competed in the races on Sunday and 32 people were on the water on Saturday".

She said there was " a real buzz" on the course on Sunday, when people from the ages of 7 to 60-plus were on the water, some of whom were never in a canoe before and were trying the sport for the first time.

Valerie Connolly says that clubs from around the country including Sligo, Cork, Laois, Kilkenny and Limerick have already availed of the new facility.

The course will be officially opened early in the New Year and Cenoeing Ireland will hold its national championships there on April 8th-9th next.

"The slalom course has huge potential and has been bringing people into the town every weekend", says Ms Connolly.

"It has put Clonmel on the map because up to now the town wouldn't have been known for river-based activities and using the river as a resource".

Before the installation of the gates large stones and boulders were placed in the river to construct rock groins, islands and ledges in the river channel to create white water for canoeists and kayakers to navigate.

The course is included on the 56 kilometres Blueway trail from Cahir to Carrick-on-Suir, and in which up to €200,000 will be invested  to encourage more recreational water activities on the river.

The Sports Partnership is hoping to recruit a hub co-ordinator in the New Year to draw up programmes and activities for schools, clubs and members of the public.

Anyone looking for more information should contact the Tipperary Sports Partnership at Ballingarrane House, Clonmel (tel. 052-6187080) or the Ardfinnan or Clonmel Canoe clubs.