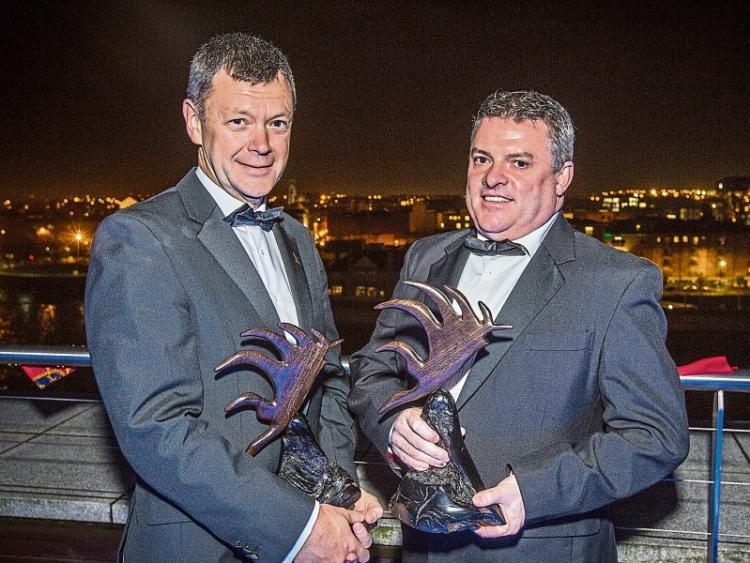 Patsy Carney (left) and Tom Brennan, co-founders of Eirgen Pharma, who were presented with a joint award for their contribution to business at the 11th annual University of Limerick Alumni Awards.

University of Limerick Alumni bestowed their highest honour on four of the university’s outstanding graduates at the presentation of the 11th annual UL Alumni Awards.

The four include Waterford-based Patsy Carney and Clonmel resident Tom Brennan, co-founders of Eirgen Pharma, who were presented with a joint award for their contribution to business.

Tom Brennan and Patsy Carney’s story dates back to their days working together in the pharmaceutical industry at the start of the new Millennium.

Tom has been married to Gráinne for 20 years and the couple have three children - James, Kieran and Maeve.

He grew up on a farm in Clough village in Co. Laois and has been living in Clonmel for over 25 years. Tom’s early career was spent as a chemist at Clonmel Healthcare, followed by Norton Healthcare. He is also a Six Sigma Black Belt (Six Sigma is a set of techniques and tools for process improvement) and a Qualified Person (as per Directive 2001/83/EC for medicinal products).

Originally from Askeaton, Co. Limerick, Patsy has lived in Tramore for the last 26 years with his wife Phillipa and their four children- Lochlann, Dylan, Tom and Alana.  Following his graduation, Patsy’s first job was as manufacturing supervisor in Rorer Ireland in Nenagh, followed by a number of years working in R&D (research and development) at Beecham Pharmaceuticals in the UK until his return to Ireland in 1990.

Working together in IVAX Pharmaceuticals, where their paths converged in 1996, Tom and Patsy undertook the MBA programme together at UL, graduating in 2005. During their studies,they identified a specific niche in the pharmaceutical industry, focusing on the development of highly potent pharmaceutical products.

The original business plan to develop this opportunity was an assignment for the Entrepreneurship Module of the MBA programme, led by Professor Patricia Fleming at UL.

During this time Tom and Patsy – accompanied by Prof. Fleming - also took their business idea to San Diego where they represented UL at an International Business Plans Competition, making it to the final six and they had the only European entry at that stage of the competition.

In the same competition they also won an award for the best “telephone pitch” to a US investment banker.

Tom and Patsy’s business plan led to their creation of EirGen Pharma in Waterford, a company which now exports products to 45 countries worldwide including all of the EU, US, Canada and Japan from its state-of-the-art high containment facility.

This is a long way from the company’s humble beginnings, where staff initially had to base themselves in offices inside 40-foot containers, while Tom and Patsy met many challenges and competition from other sectors as they attempted to source investors.

In the decade since it was founded EirGen has successfully completed over 45 clinical studies, mainly in the oncology therapeutic area and now employs over 140 highly-skilled personnel at their facility in Waterford, which is licensed by the HPRA, FDA and Japanese PMDA regulatory authorities.

The company also benefited from a substantial investment from Saudi Pharmaceuticals Industries and Medical Appliances Corporation, one of the biggest pharma companies in the Middle East, using those funds to build out the facility and invest more in their R&D pipeline in 2012.

Always looking for the next opportunity, Tom and Patsy then turned their attention to the United States, where much of their business lies, with a view to attracting the right company to bring theirs to the next level.

In May of last year EirGen was acquired (in a deal worth 135 million dollars) by OPKO Health Inc., a Miami, Florida-based pharmaceutical company engaged in providing total solutions from diagnosis to treatment for unmet medical needs to improve the lives of patients.

Part of the deal was that Tom and Patsy would remain in their roles at the company where Tom is the CTO while Patsy is the CEO.

EirGen Pharma has been nominated for and won numerous awards including Irish Life Science Exporter of Year; AIB/Business and Finance Irish Emerging Company of the Year; Ernst & Young Entrepreneur of the Year and David Manley Start Up Business of the Year

Tom and Patsy are committed to and excited about the future of the company they founded. Earlier this year EirGen OPKO entered into an agreement with IDA to acquire an advanced technology building in Waterford to establish a new state-of-the-art R&D facility, which will lead to the creation of an additional 150 jobs.

The other graduates honoured by UL were former Minister for the Diaspora and All-Ireland-winning Kerry footballer Jimmy Deenihan, who received a Personal Achievement Award for his contribution to art, culture and sport; and Ghanaian Dr. Mark Mantey, Director of the Padre Pio Rehabilitation Centre, an agency whose work is primarily based around the rehabilitation and reintegration of leprosy survivors and their families. He was presented with a Humanitarian Award for his contribution to society.