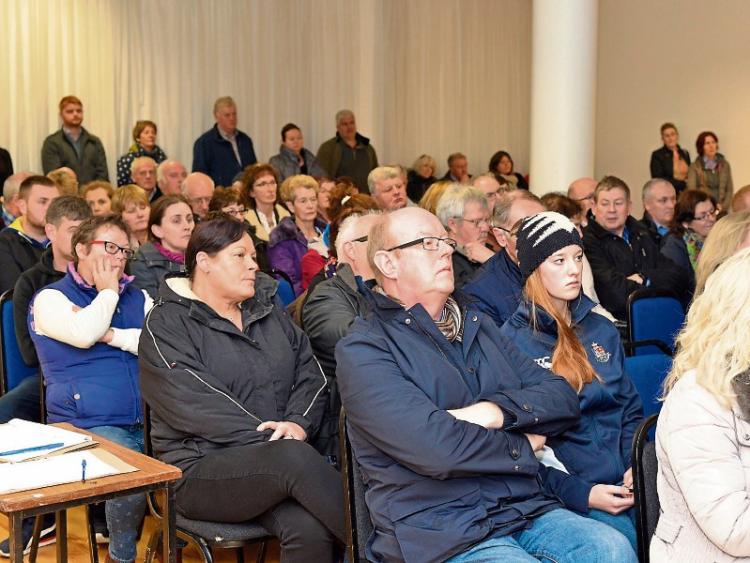 A section of the large crowd at the meeting to discuss the future of the Canon Hayes Centre in Tipperary town.

Cllr Leahy said he had heard joint membership of both facilities could cost up to €900 at the recent meeting called in the town to save the Canon Hayes Centre.

“They should be working in tandem together”, he claimed.

Clubs now offer a similar package for about €300, meaning footfall has decreased at the Centre. The Swimming Pool needs to be subsidised with thousands of Euro each by the local authority.

“Can we bring down the costs and increase footfall to both?” asked Cllr Leahy.

“It needs to be made more economically viable. Both parties are going on different paths, but they need to find a way forward together.”

Cllr Martin Browne said there needs to be a management committee set up to find that forward.

“There will be trouble very shortly, if something is not done. It would be a huge loss to Tipperary.

€900 for both is out of people’s price range, especially with Ballykisteen up the road.”

“I remember the Munster Rugby team training there. I’d support anything that might help it. It’s been a tremendous asset,” he said.

Cathaoirleach Roger Kennedy said he agreed and, since the local government reforms of 2014, the Co. Council has become the “number one stop” for community development.

“There’s a huge number of programs being undertaken. It’s up to us to support it.” Canon Hayes is now in competition with other Centres that are offering cheaper rates. “I don’t know how you can help the Canon Hayes Centre.”

Tourism Development Officer Marie Phelan told members she would report back to Sinead Carr, Director of Services for Community and Economic Development, and come back with a response regarding linking the two facilities.