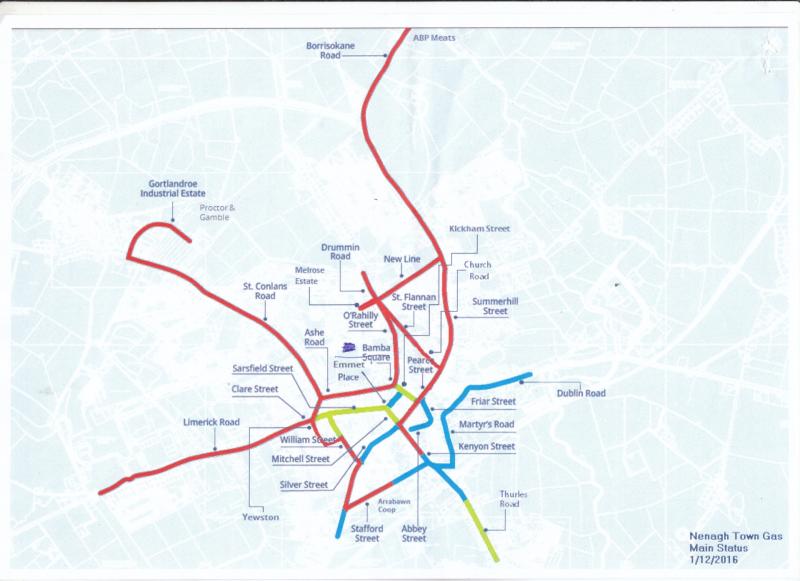 With the Christmas shopping trade out of the way, Gas Networks Ireland (GNI) will resume its €17m pipe laying works around Nenagh town centre immediately.

The company, which is involved in laying natural gas pipes as well as water and waste water pipes in the town, had applied to close Stafford Street in December but the application was refused by Tipperary County Council

The council has a policy of allowing no roadworks in the town centre in the runup to Christmas.

However, the company has been granted permission to close 180 metres of the same street from the Kenyon Street junction to just past Arrabawn Co-Op from this Wednesday, January 4.

A specific diversion plan will apply to HGV traffic accessing and egressing Stafford Street Lower, and diversion routes will be signposted. Emergency vehicles will have access throughout the closure.

Meanwhile, Nenagh Municipal District Council manager Marcus O'Connor has told councillors that the council wants the areas dug up by Gas Networks Ireland to settle before streets are reinstated.

He warned that when the pipe work is finished the streets will have to be shut again. However, he said they “would not shut down the town completely” because the council did not want it to become a “building site”.

The district manager said that GNI had made a “good contribution” towards reinstatement but could not be expected to fund work on any street that was in poor condition before the work started.

The council did no work in Nenagh town centre for the past while because it was aware the pipe laying project was on the way.

He said there was still at least six months' work in the project before it was completed.

Cllr Hughie McGrath asked at the December meeting of Nenagh Municipal Distrcit Council that the council look at not fully closing streets when reintatement was being carried out.

“If we could do some of the main streets it would show what the town will be like when the work is finished,” he said.

Cllr McGrath warned that if the work was not completed by September, then they were facing into another winter of roadworks.