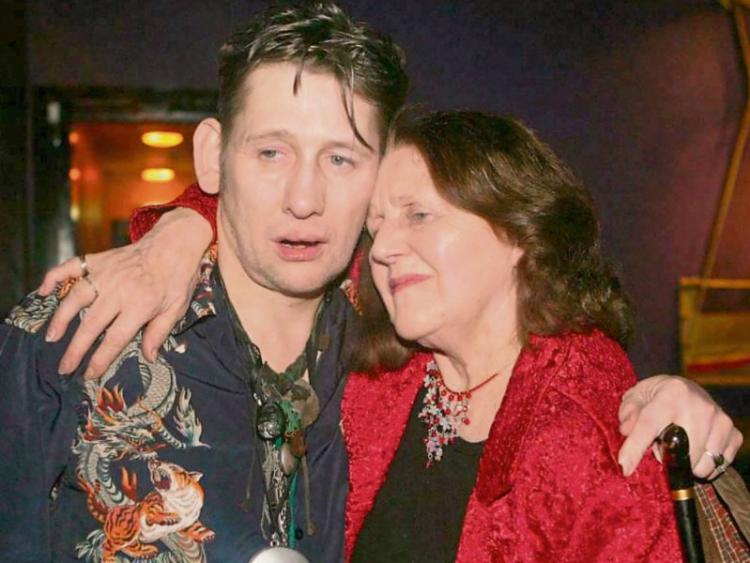 Shane McGowan with his mother Therese, who died on New Year's Day

The new year got off to a tragic start in Tipperary with the county having the first road fatality of 2017.

The Silvermines village was in shock this week following the tragic death of one of its much loved residents, Therese McGowan, 87, who died on New Year's Day.

Mrs McGowan, nee Cahill, mother of songwriter and singer Shane, was pronounced dead at the scene of a single vehicle crash at Ballintoher at around 3pm. The exact circumstances of her death are not known and it is thought she may have suffered a heart attack while driving before crashing into a wall. Her body was brought to University Hospital Limerick for a postmortem. Her funeral Mass will be held in Our Lady of Lourdes Church, Silvermines, at 1pm next Sunday, January 8, followed by private cremation.

Therese, who was originally from Silvermines, and her husband, Maurice from Dublin, came home from England some years back to settle in the village. She was a well known singer and Shane credited her with inspiring him to get involved in music. She was an award-winning folk singer when she was younger.

Locals described the McGowans as a “very private family”.

Silvermines parish priest, Fr Brendan Moloney toild the Tipperary Star that Therese and Maurice were private people who were respected within the community.

He described the death of Therese as a "tragedy and a sad time for Shane, Siobhan and Maurice. We are praying and supporting them."

Local TD Alan Kelly said that along with her husband, they were held in high regard and with great affection. "She was someone who was greatly liked by all who knew her. We are all thinking of the MacGowan family at this time and all their neighbours as well," Mr Kelly said.

Local councillor Mattie Ryan said Therese would be “sadly missed. Our thoughts are with the family.”

Shane's partner Victoria Mary Clarke said on Twitter that Shane would like to say thank you and God bless to all the people who are offering kind words and condolences.

The accident is being investigated by Nenagh Gardai, who appealed for witnesses to contact them at 067-31333.

Meanwhile, Shane this Tuesday attended the funeral in Dublin of former Pogues manager Frank Murray, who died from a suspected heart attack on December 22.