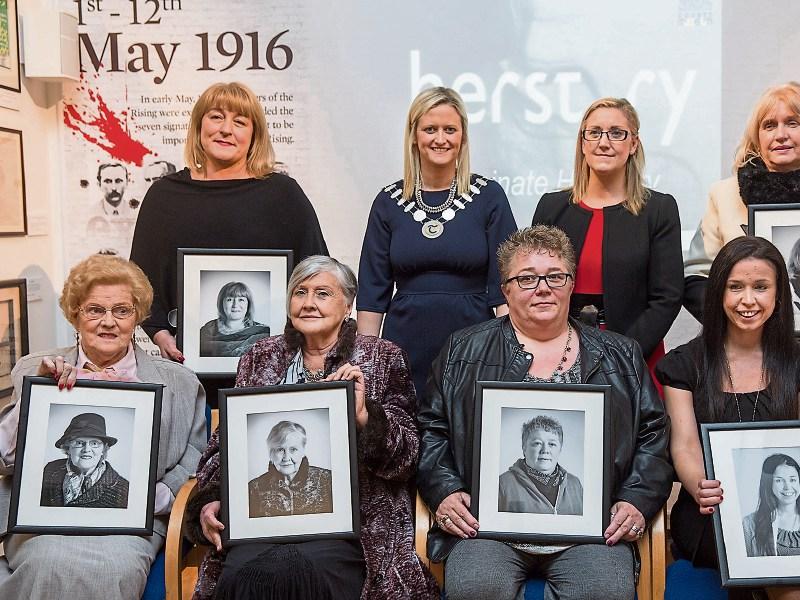 Some of Tipperary's finest women community activists were honoured in a unique way in Clonmel last week.

They were literally up in lights as their images were illuminated on a wall in the County Museum.

The nine women were featured in 'Illuminate Herstory',  a new light projection festival to celebrate women and girls all over Ireland. Over the weekend of Nollaig na mBan,  when the Christmas lights were turned off, the country was lit up with the faces of hundreds of Irish women.

Launching the event in the County Museum, County Councl chairperson Siobhan Ambrose said apart from those honoured on the night, Tipperary was leading the way in terms of women in important positions.

She was not only the first woman to chair the new Tipperary County Council but Louise McLoughlin was the vice chair; Marie McMahon was the curator in the Museum who planned the night's event while women were also at the helm in the gardai, Educational Training Board, Clonmel Library and numerous services in the County Council.

She paid glowing tribute to the women honoured on the night who were also presented with framed copies of the photgraphs that were illuminated on the wall.

A number of the women were unable to attend on the night, including Jacinta Mullins whose father died last week and Cllr Ambrose and Marie McMahon expressed their condolences to Jacinta and the Mullins family on behalf of all those present.

Jacinta, June Looby and Pamela Hallahan were honoured for their work with the River Suir Suicide Patrol. The recently formed group patrol the river banks in Clonmel at weekends and have intervened to prevent a number of suicides.

Ina Doyle and Amanda Quigley were honoured for their work with Clonmel Soup Kitchen.

Ina has been volunteering for around 20 years.  She began her volunteering venture in the Wilderness Youth and Community Centre through Waterford Regional Youth Service attending many summer outings as a helper and head chef.

She began helping with the local St Vincent de Paul, Community drugs programme, Womens groups and fundraising for many event and local charities.

Her proudest moment was when she volunteered for the EU Charter in Cashel where over 1,200 delegates were catered for over a three day period.

In 2012, she ventured out and set up up a Soup Kitchen from the boot of her car in Clonmel, having awareness of the struggles for those who are homeless, living in addiction and dealing with mental health challenges.  The Irish United Nations Veteran Association approached the Clonmel Soup Kitchen and offered Ina and her cohorts their cafe on Friday and Tuesday evenings at the local railway station.

Amanda Quigley, who is involved with Ina in the Soup Kitchen, has  talents so diverse  that also led her to volunteer as an advocate and support person through the National Irish Foster Care Association.

She is a voluntary member of Irish First Mothers supporting women through loss by adoption and in giving evidence to Commission for Reform into Mother and Baby Homes.

More recently Amanda spent the last number of years as a volunteer counsellor with Care Cancer Support Centre in Clonmel and Circle of Friends in Tipperary Town.

Rita Bourke is a SeeChange Ambassador for the Green Ribbon Campaign and helps in promoting mental Health awareness through fun and interactive activities.

She is also an active PRO for the South Tipperary Mental Health Consumer Panel, which gives people a voice while working closely with the HSE to improve mental health services through activities and events.

This Christmas Rita devised the successful Santa Dash and entertainment under the Mainguard in Clonmel, a project created to bring awareness to the Green Ribbon Campaign which supports mental health awareness.

Through her mental health programming she is assisted by three other brilliant women - Kelly Lee, Bridget Teehan and Mia Carney.

Carrie Acheson has given a lifetime of service to the community.  The former Mayor of Clonmel and TD is president of Clonmel Show and has been involved in the National Ploughing Championships for many years.

She is  a lifelong member of Fianna Fail  and very active in the Kilfeacle Old IRA Commeration committee. Carrie Is a truly great letter writer - congratulations, sympathy or thanks - any occasion that she hears about that affects her friends and acquaintances

Patsy McGuirk was the 2016 winner of the Eileen Anderson Unsung Hero Award  for her trojan work in the Cahir Area, which she has done so quietly, efficiently but without drawing attention to herself for many years.

Some the groups that Patsy is associated with are - Cahir Park Community Pre-school, Cahir Lions Club, Cahir Second hand bookshop, English classes for Foreign Nationals, Cahir Men’s Shed, New Inn & Knockgraffon Choir, Cahir Church Choir & Summer outings for the elderly. Patsy is held in high affection & appreciation by the people of Cahir for her outstanding contribution to their community life, she works tirelessly and under the radar for a large number of individuals and groups and has never sought any recognition for her efforts.

Maureen Calvert moved from Canada to Cahir  in 1988. Since then she has worked tirelessly with many volunteer groups in Cahir such as Cahir Development Association, Cahir Tidy Towns, The Fair of Cahir, Community Hall and the Choral Society - it must be noted that Maureen has the voice of an angel.

She was instrumental in twinning Cahir with Scarborough, England and her vision is to see a small town such as Cahir develop into a thriving, bustling and cultural community.