Bulmers visitor centre could be established in Dowd's Lane 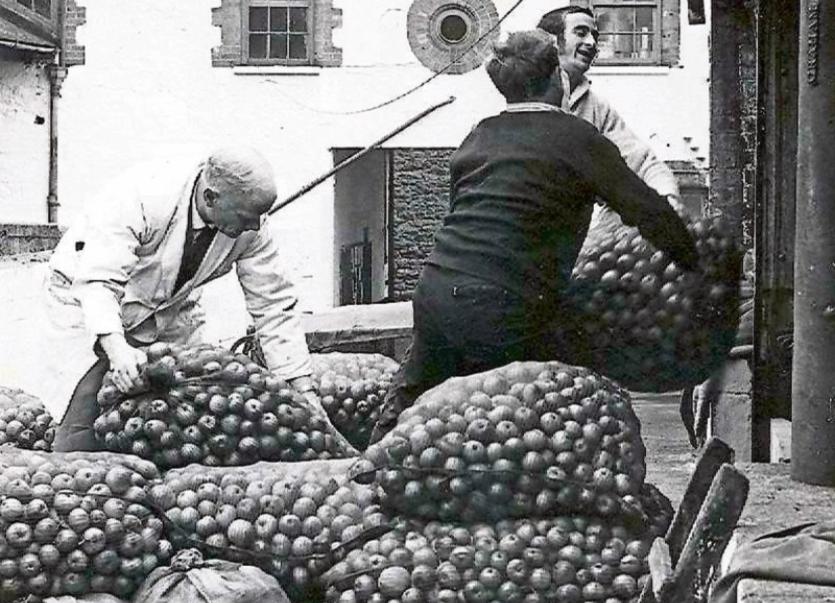 An apple delivery to Bulmers in Dowd's Lane

The agreement by C&C to enter talks about establishing a Bulmers visitor centre at Dowd's Lane in Clonmel has been welcomed.

Dowd's Lane in the town centre was synonymous with the cider-making company for years and was the site where the apples were crushed.

The announcement was welcomed by members of Clonmel Borough District at their monthly meeting.

They were also delighted with the recent massive double jobs boost for the town, which saw the announcement by IQ Pharmatek of a replacement pharmaceuticals industry for the former Suir Pharma plant, with the promise of 200 jobs; and the confirmation by Bulmers of an €11 million investment in a new plastic bottling facility at its Annerville plant, which has led to the creation of 80 jobs.

District Mayor Andy Moloney said he hoped that the employees made redundant by Suir Pharma last May had taken up the offer of upskilling when the company closed.

Cllr. Siobhan Ambrose said a Bulmers visitor centre in Dowd's Lane would be huge in terms of the number of visitors coming to Clonmel and would have a knock-on effect for the surrounding area.

She was also delighted that a Dorothy Perkins store had opened recently in O'Connell Street. Several other new shops had also opened and she looked forward to the re-opening of the former Lonergan's pub in O'Connell Street in the near future.

Cllr. Ambrose said a lot of positive things were happening in the town centre. It was still only January but this was a wonderful start to the new year, and the message had gone out that Clonmel was open for investment.

Cllr. Pat English welcomed the great news about IQ Pharmatek and Bulmers, and he hoped that the pharmaceuticals plant would open in the short term.

He thanked everybody involved in the efforts to secure the replacement industry, including District Mayor Andy Moloney.

Cllr. English hoped that the majority of those who had lost their jobs when Suir Pharma closed would get jobs in the new plant, because they were all highly skilled.

Cllr. Martin Lonergan said it was devastating news when Suir Pharma closed but it was great to see such a turnaround and it hadn't taken too long.

He acknowledged the work of those involved in securing a replacement industry, including the County Council chief executive Joe McGrath; Director of Services Sinead Carr and District Administrator Paul Murray.

It was also great to see other businesses opening in Clonmel.

Now they had to look outside the box in terms of rural villages such as Ardfinnan, which had three or four industries a number of years ago but now had none.

Cllr. Richie Molloy said that a Bulmers visitor centre in Dowd's Lane would have great potential for the town, and he also welcomed the announcements about the company's Annerville plant and IQ Pharmatek.

Cllr. Marie Murphy hoped that the Bulmers visitor centre would be opened sooner rather than later, and it was great to see the company investing in the Annerville plant.

Cllr. Micheál Anglim said it wasn't often that you got good news but this was great news.

Cllr. Catherine Carey said it was all doom and gloom two years ago and talk of Clonmel being a ghost town, but this was great news.