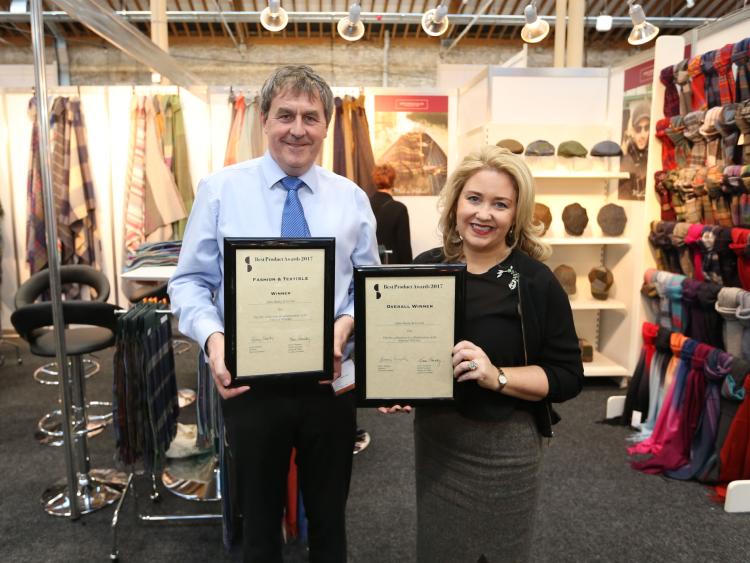 Nenagh textile manufacturers, John Hanly & Co. Ltd, were given the ultimate seal of approval at last week's Showcase Exhibition when they were presented with two top awards at the annual Creative trade show including an award for their recent collaboration with top Irish designer Mariad Whisker.
The long running textile company, which celebrates 124 years in business this year and lays claim to being one of the oldest weaving companies in the country, has been producing its own fabric at its Ballyartella mill since 1893.
Managing director Brian Hanly, who is the fourth successive Hanly at the helm of the family business, equates the company's success to its "bricks and mortar" approach to production.
“Being able to say everything is produced, from start to finish, in our factory floors in Nenagh has been central to our longevity,” explains Mr Hanly who took over the running of the business in 1985, which today employs 30 staff.
John Hanly & Co Ltd was started by father and son Denis and John Hanly and traditionally focused on spinning and carding wool to produce flannels and blankets.
However in 1950 a fire broke out in the mill destroying the entire building and the Hanly family home. After the fire a decision was made to move away from the carding and spinning trade and instead focus on weaving meaning that the business had to effectively build itself back up from scratch.
Several years later, the business employed its first full time designer and multiplied the number of fabrics it produced for the textile industry and by the 1960's had linked with two other Irish mills to begin exporting their products to Europe and the US. In the 1970's the company produced its first accessories range of blankets and lambswool scarves as well as exporting its fabric directly to Germany, Italy, France, UK, USA and Japan.
Fast forward nearly 40 years and the company today produces a wide range of scarves, capes, throws, blankets and caps while also counting the likes of Dubarry Ireland and DH Fashion among some of the many clients of its Hanly fabrics.
“We are very proud of these awards but it’s down to each member of staff that we have been able to remain in business. The textile industry is used to a certain amount of volatility but we have a very good group of people working for us,” added Mr Hanly who was on hand to collect the awards for Best Overall Product and Best Product Award in the Fashion & TextISLE category at the RDS.