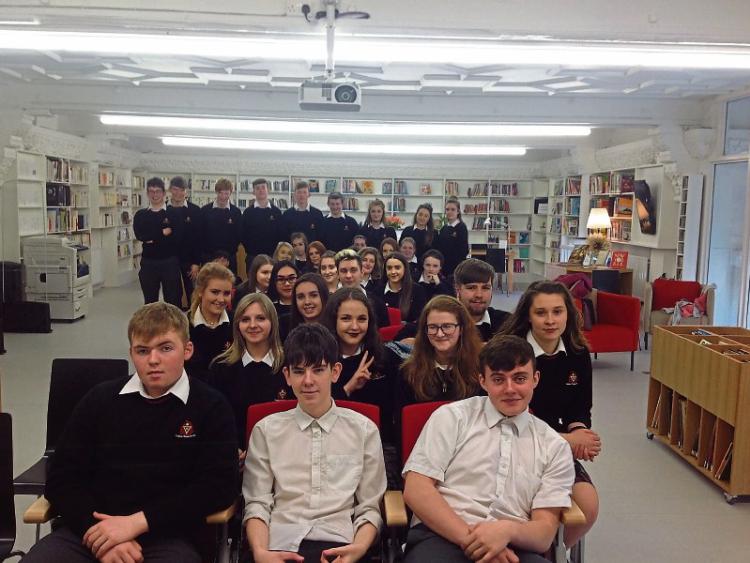 The award-winning Alliance Française is the third biggest in Europe and the first established in a non-French speaking country. The aim of the Alliance Française in Dublin is to promote French culture, as well as to provide a space for intercultural exchanges between Ireland and the cultures of the French-speaking world. The branch has more than a century of history, but has existed in its current form for almost 60 years.

The Alliance Française Dublin is a French Language and Cultural Centre which also hosts a French Multimedia Library. The students and teachers of Coláiste Phobal Ros Cré began their day in the café ‘La Cocotte’, where they had a ‘pain au chocolat’ (chocolate pastry) and a ‘chocolat chaud’(hot chocolate)! They then had a tour of the multimedia library, where they learned about the purpose of the Alliance Française and did a quiz to become more familiar with the books, magazines, CDs and DVDs that can be borrowed there.

After the library visit, students did a workshop which was designed to get them speaking as much as possible and to become active participants. This activity was enjoyed by all.

The Alliance is located on the corner of Kildare Street and Nassau Street and is a short walk from Grafton Street. After lunch on Grafton Street, we returned to school.We look forward to visiting the Alliance Française Dublin soon again in the future

On March 22nd ‘The Green Schools Committee’ in Coláiste Phobal Ros Cré took part in a fundraising event to raise money for a child in Uganda. Each member of the committee walked 5km carrying 2.6 litres of water.

Due to bad weather conditions, the Green Schools Committee decided to do the 5km walk in the school gym. We did our ‘Walk for Water’ on this day as it was World Water Day and also to raise awareness of water shortages in poorer coountries. Achievements:

*We raised €190 on this day from our sponsorship cards.

*We achieved a 5km walk.

*We carried between 2- 6 litres of water each.

*We were well prepared and organised so everyone took part.