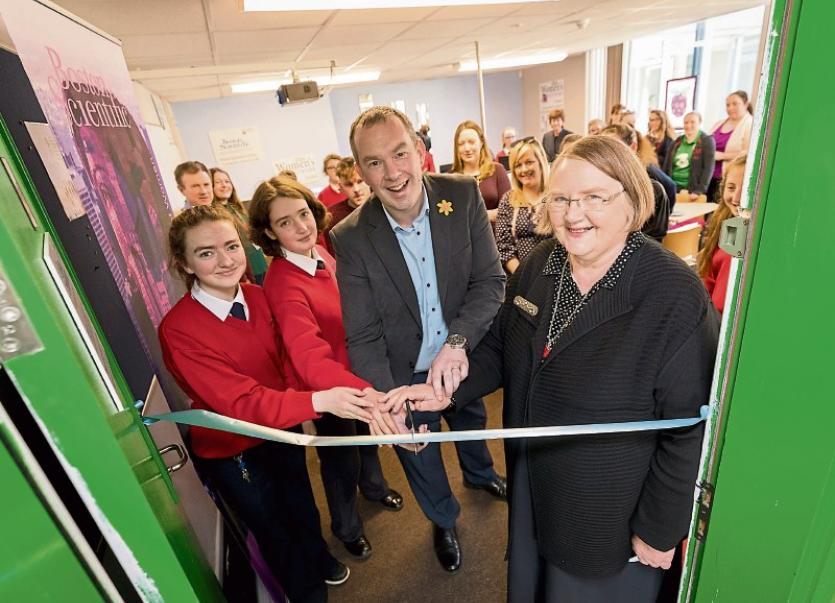 As one of the initiatives of the Boston Scientific Women’s Network to promote STEM (Science, Technology, Engineering and Maths) to young women, a joint venture was undertaken between the Presentation Secondary School Clonmel and the Women’s Network.

Marie Lawlor and Tracey O’Leary, teachers at the Presentation who are currently undertaking a post graduate certification in 21st century teaching and learning, wanted to bring coding to life within the school.

They were inspired by two students from the school, Caoimhe Woods and Aoibhín Foley, who won the Alexion Award at the Young Scientist exhibition earlier in the year.

Ethel Reynolds, Principal and Michael O’Loughlin, Deputy Principal were supportive of the project and provided a low usage classroom which is now rejuvenated into the computer science coding lab.

Parents, teachers and students alike all baked to contribute to a huge bake sale held at Boston Scientific in February.

Over €1400 was raised from the cake sale and a further €1189 was donated by Boston Scientific and the Women's Network.

In addition to utilising the Boston Scientific environmental recycling programme, the company was able to repurpose some tables and chairs from the plant.

Volunteers from the company's Women’s and Young Professional network and the school painted the classroom to give it new life and purpose over the midterm.

All other equipment was purchased and an official opening was held on 24th March.

Ethel Reynolds, Principal spoke about her delight with the coding lab and the opportunity this new resource provides for the students.

"The continual evolution of education requires innovation and creativity to be at the forefront of the skills with which we equip our young ladies", she said.

Kieran Dunne, HR director of Boston Scientific, spoke about his pleasure that the school was able to support such a great initiative.

The engagement and energy from the students makes the effort to bring this project to fruition worthwhile.

He also spoke about the many opportunities for a diverse range of careers from STEM.

Brid Hallinan, chairperson of the Boston Scientific Women’s Network spoke passionately about the need for young women to engage in STEM and to really look at the huge possibilities careers in STEM can provide.

She also spoke about the need for diversity in the workplace and the unique perspective women bring to any organisation.