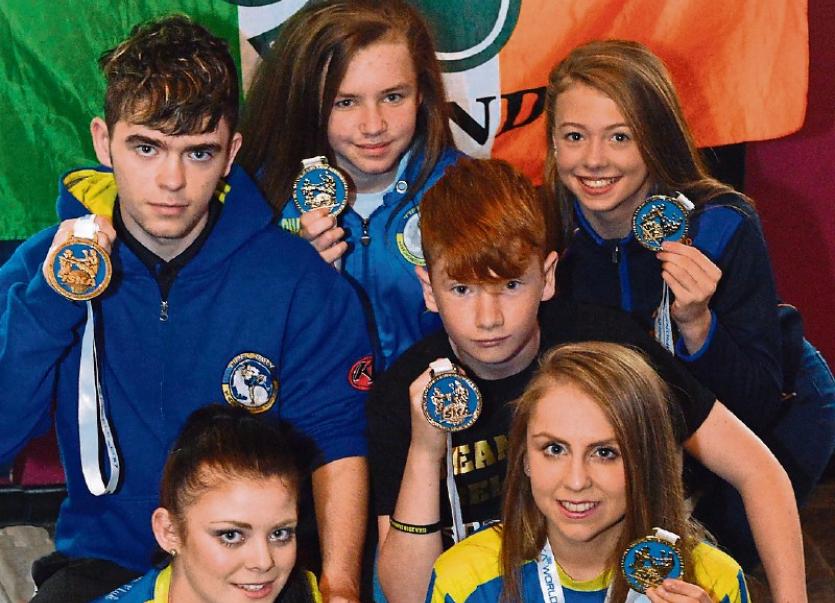 Six young Tipperary fighters competed and won with eight medals between them; 3 gold, 3 silver and 2 bronze.

“There’s no magic formula it’s just hard training and hard work,” said coach Craig Sutton, a previous National Irish Kickboxing Champion. “We now have three world champions in Tipperary town which is fantastic for the kids and for the club. ”

Lisa Moloney from Kilross will be 21 in a few weeks and won Gold in the 55kg Senior category. It was a fantastic follow-on from winning the IKF (Irish Kickboxing Federation) Senior IKA title earlier this year. “The World championship was an amazing experience. I trained very hard in preparation and technique was drilled into us so I did the same thing every night repetitively just to get ready.” said Lisa.

14-year old  Shannin O’Dwyer from James Connolly Park, travelled to the World Championships in Greece for the first time and returned with a Junior -55kg Bronze medal in kickboxing and a Gold in Low kick -60kg. “I wasn’t expecting to win but I did my best and I’m really happy with the result.” 2017 has been a good year for Shannin, who also won the IFKA All-Ireland title in April.

12-year old Alisha Chambers from James Connolly Park, became the 2014 World Champion in Italy when she was ten-years old and returned home from the 2017 championships with another Gold and Silver medals. Alicia won Gold in the Junior -45kg category in Kickboxing and Silver medal in the Junior -55kg Low-Kick event that she competed in for the first time.

“I wasn’t very confident going out this time and tried to treat it like an ordinary competition and to be honest, I am over the moon.” The two-times World Champion is the current 2017 IKA National Champion with 3 previous title wins in the past and just recently in April, she won the IFKA 5 nations title fight in her home town of Tipperary. Alisha will be travelling to the UK in August to compete for the IFKA European title in the -45kg category.

Chloe Quinn (19 year old) from Aherlow Heights returned from her second World Championships with Silver in the Senior -55kg category. This dedicated and tenacious fighter had to fight two steps above her normal weight category as there weren’t enough competitors. Chloe met fellow teammate Lisa Moloney in the final with an end result of Ireland achieving Gold and Silver in the -55KG event. “I’m delighted with my medal,” added Chloe. Chloe achieved a Bronze medal at the World Championships in 2014 and is a previous 2-times IKF Junior Light Contact National Kickboxing Champion.

14-year old Scott Carey Massey from Pearse Park won Sliver in the World Championship in 2014 and returned victorious again with a Silver medal in the Junior -52kg category. “I trained very hard for the World’s so I’m very proud of myself,” said Scott.  Scott just recently won the IKF Irish title in April.

It was a successful first World Championship for 15 year old Aaron Frewen from the Glen of Aherlow who returned with a Bronze medal in the Junior -63KG. “I had done all the training and knew that all that was left was to win or lose so going into the fights I was very relaxed. I’m very proud that I won the Bronze medal.”

This was the second time the Tipperary Kickboxing Club competed in the World Championships. In 2014 five fighters returned with 5 World medals: Gold Silver and Bronze.

The Tipp Kickboxers wish to sincerely thank all the sponsors who helped get them to the World Championships in Greece and the public who supported so many fund raising events.”