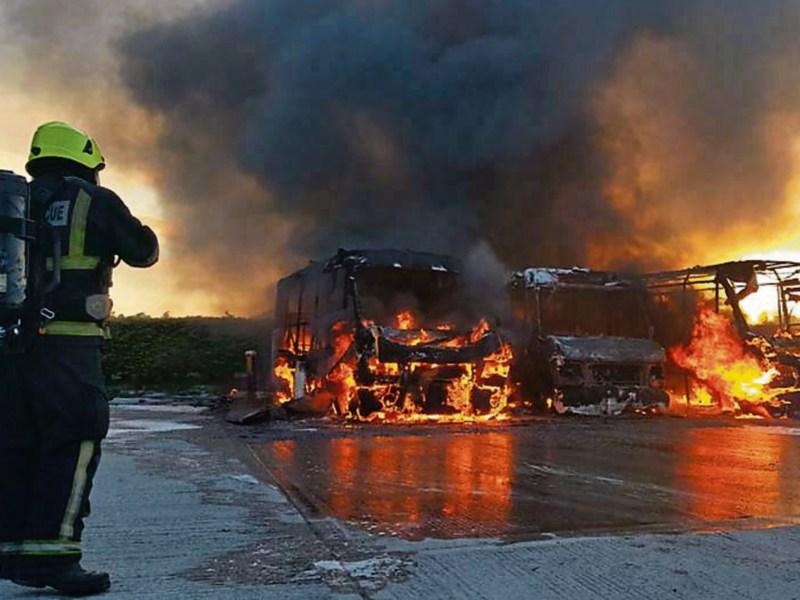 The owner of a Clonmel bus fleet is keeping the show on the road after fire destroyed three of his vehicles.

Tipperary Fire and Rescue Crews were called to a serious fire in Clonmel last Thursday, at Lawlesstown, just outside Clonmel.

The bus yard belongs to John O'Donoghue, well know for his transport business in the area.

The brave fire crews were mobilised to the multiple bus fire just before 5am. The alarm was raised at 4.50am by a staff member arriving at a nearby business.

Three buses were destroyed in the blaze. Gardaí crime scene technicians investigating the cause of the fire have deemed it to be an unfortunate accident, according to a garda spokesperson.

Mr O'Donoghue told The Nationalist that it's thought one bus went on fire and the flames spread to the two nearby vehicles.

While the fire service got to the scene "as quick as they could," Mr O'Donoghue said, the three buses were already destroyed. The fire crews could see the thick, black smoke rising before they even left their station in Clonmel.

"There were no casualties, that's the main thing. It would be worse if someone was hurt or injured," Mr O'Donoghue reflected.

"We're still operational, thank God," he said, explaining that his full fleet had 21 buses and no passengers will be left stranded. "We're looking at replacing (the burned buses) now. We have to go forward, not backward."