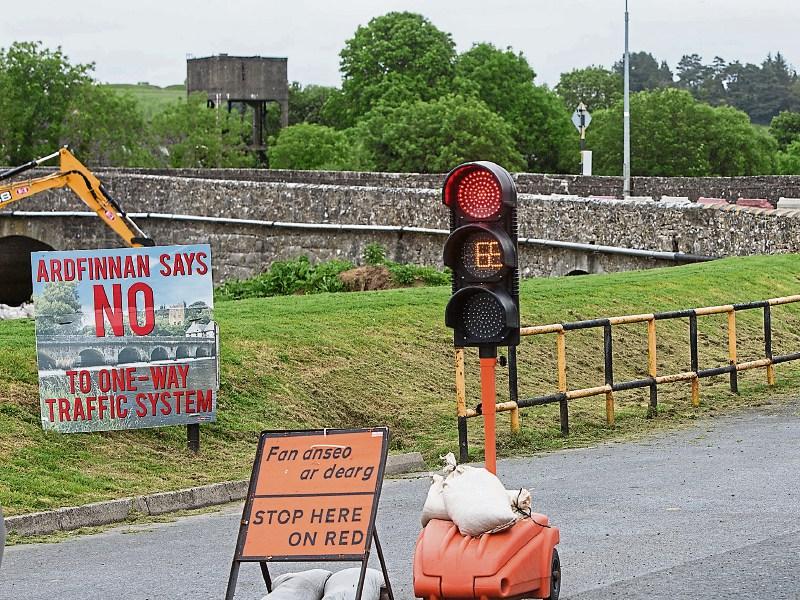 Council says reports and surveys have to be carried out at Ardfinnan.

Taken to task by Transport Minister Shane Ross over delays in proceeding with repair works to Ardfinnan Bridge, Tipperary County Council have defended their  role.

Last week Minister Ross  expressed his frustration  as to why €800,000 he allocated for the works was not spent and called on Tipperary County council to explain why.

There is mounting safety concern in the village over the existence of a one way traffic system and traffic lights  that Tipperary County Council imposed over two years ago on a “temporary “ basis until the bridge, which was damaged, by flooding was repaired.

In a statement issued  in response to  the remarks made by Minister Ross, Tipperary  County Council say -

“Tipperary County Council wishes to clarify its position in relation to the comments made by the Minister for Transport, Tourism and Sport, Mr. Shane Ross as published in last week’s edition of the Nationalist concerning the delay in progressing the remedial works to the Ardfinnan Bridge.

The Minister contacted the Director of Services, Roads on the 14th June, 2017 and was provided with a full briefing on the position in relation to Ardfinnan bridge including the significant environmental, ecological, archaeological and other challenges which must be addressed in any future works on the bridge. The Minister was subsequently provided with a copy of the Options Report on the bridge prepared by the Council's Consultants.

The area and bridge are afforded environmental, ecological and heritage protections under various legislative provisions. As a result of this, the Council is obliged to consult with and adhere to the requirements of the various associated statutory bodies and this involved completing specialist surveys and reports.

Based on the initial findings of an ecological screening assessment, the presence of protected species (crayfish) and given that the remedial works to the Bridge will include in-stream activities, it is now necessary to conduct a Natura Impact Statement (NIS) and an Appropriate Assessment (AA).

Consequently, an application will now have to be made to An Bord Pleanála under Section 177AE of the Planning & Development Act circa September/October 2017.

Therefore, given the statutory timelines involved in completing the NIS and making a detailed planning application, the intended works cannot now proceed as planned and this fully outlines why the initial allocation could not be fully spent.

Cost Estimation of the full extent of surveys and works are to be determined.

However, It is clear from our engagement with the Minister  that the provision of any additional funding towards the project represents a very significant challenge.

The Council is now proceeding with the pre-planning process and is engaging with the statutory bodies in this process.