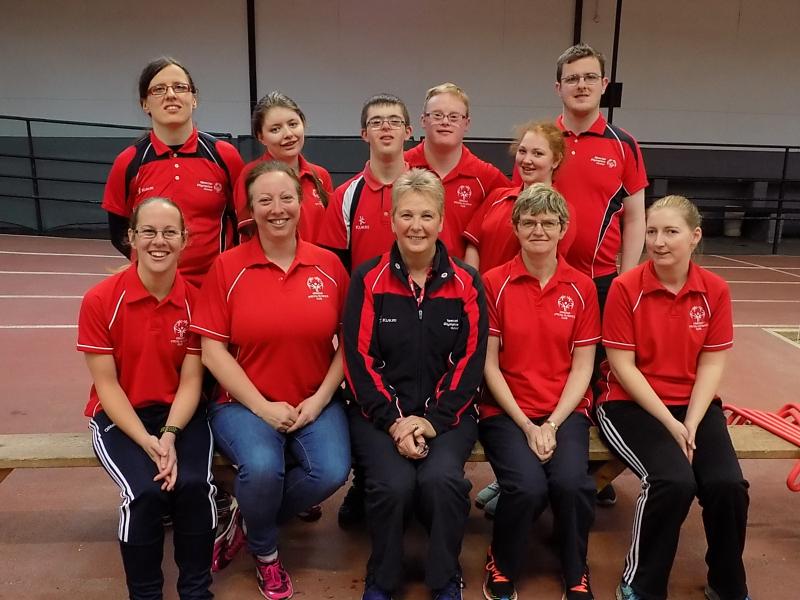 Special Olympics athletes throughout Ireland have been working hard in their clubs to make their way through a strenuous 4 year advancement cycle, leading to the selection of some 1600 athletes who will compete in the National Games next year.

The Games will include 13 sports disciplines and a Motor Activities Training Programme, and will take place at 9 different venues in and around Dublin. Some 2500 volunteers will also be involved in what is likely to be the largest sporting event in Ireland next year. Thereafter, the revolving 4 year advancement cycle will conclude with final selections for the Team to travel to represent Ireland at the Special Olympics World Summer Games to be held in Abu Dhabi in 2019.

Around 40 athletes from Clare, Limerick and Tipperary, together with their coaches, family members and supporters, gathered at the Nenagh Olympic Athletic Club's indoor sports hall at Ballygraigue for the first split squad training session. Further full squad sessions will be held over coming months in Nenagh, Limerick and Cork, as well as team building social events to enable athletes to get to know others in the Munster squad.

Pauline Nugent, Head Coach Munster Athletics Team, said "I am so proud of how hard all our Ormond Club athletes have worked over recent years, and it is a tribute to the efforts of everyone in our Club that we have 8 athletes chosen for the Munster Team. Their training will become even more intense in coming months, and we are so fortunate to have such dedicated local coaches, family members and supporters. Club members Anna Roche and Brid Mackey will be accompanying and guiding our local athletes as Coach/Chaperones throughout their remaining progress towards and during the Ireland Games in June next year."

She added " I would also like to thank Nenagh Olympic Athletics Club committee and members for all their co-operation and readiness to allow us to make use of their superb indoor facility in Nenagh. "

Also selected for the Munster Squad is local lady Lucy O'Neill, a track and field athlete with OSOC, Nenagh. Lucy also trains for swimming with Limerick City SO Club at U.L. She joins the Munster Swimming Team and is very much looking forward to the overall experience and challenge of representing Munster for the first time.

Further updates on the progress of the Munster team will feature in future editions and we wish them all well as they aim for success in The Ireland Games in June.