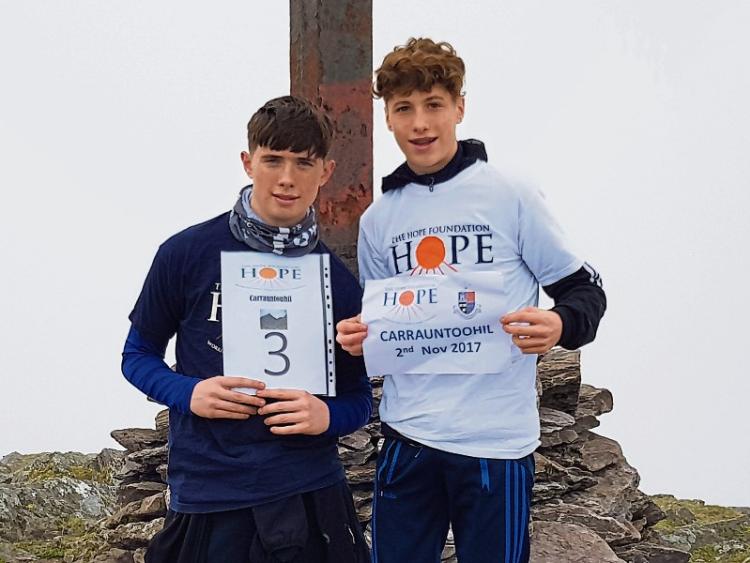 Two Rockwell students heading to Kolkata next year have taken on an ardous fundraising challenge climbing the highest peaks in each province.

TY students Daire Murphy and Sean Allison are taking part in a schools immersion programme with the Hope Foundations which will see them travel to Kolkata (formally known as Calcutta) for a week to see the living environment that the slum children are born into and grow up in.

The students, combining their desire to attain a silver medal for Gaisce and their need to fundraise for Hope, decided to climb the four highest peaks in each province in Ireland,

They did Croagh Patrick (Co. Mayo) on September 23rd, Lugnaquilla (Co. Wicklow) on 15th October, Carrintoughill (Co. Kerry) on 2nd November, and their most recent conquest was Slieve Donard (Co. Down) on November 19th.

"We have really enjoyed the different challenge each climb gave us and the scenery was breathtaking. We have decided that we need to revisit the highest peak in Connaught which is Mweelrea Co. Mayo as Croagh Patrick is not the highest so over our Christmas holidays we will do this one," said Sean Allison.

As part of their on-going fundraising campaign Daire and Sean will be climbing Slievenamon on St. Stephens morning. They have issued an invitation to anyone who feels energetic on St Stephen’s morning at 10am to join them at the foot of Slievenamon to climb for Hope and join them for a cup of tea afterwards.