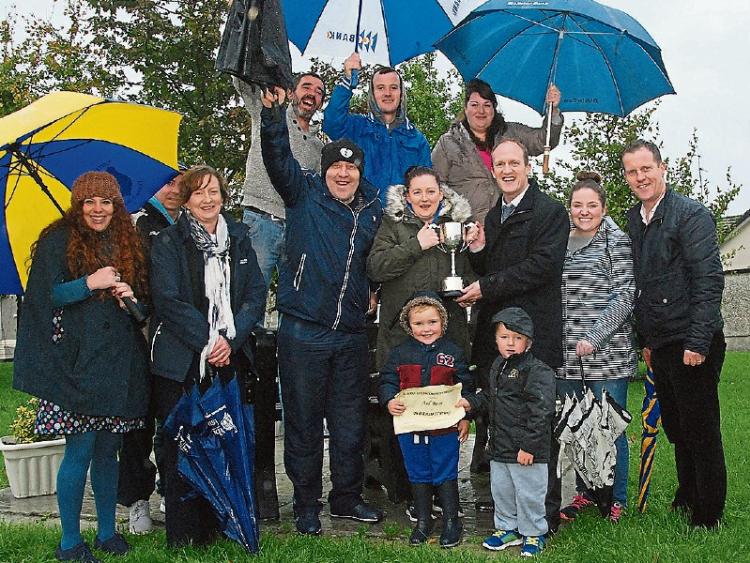 What a year we have had! We have already outlined the year in a previous article and more recently in the 'Roscrea People'.

The year has seen great improvements take place with lots of tree-planting with the help of the local branch of Crann, litter picks and maintenance by our Community Employment Workers as well as floral arrangements and maintenance by ourselves in 2017. This saw us arriving at the Helix to receive a National Award in September. We were most delighted to be awarded a Silver Medal – our greatest achievement in the competition to date.

This award was the culmination of a huge community effort by those already mentioned above together with enormous contributions to the process by all of our housing estate committees who do so much in their own locality – all of which is assessed by the adjudicators. We are indeed blessed to have so many active estate committees and look forward to their further assistance in 2018.

For those of you who don’t know it, medals are not given out at the Helix – just the announcements are made. The medals and other awards are distributed at a regional meeting in October/November each year. Our regional awards ceremony took place on Monday 20th November in the Abbey Court Hotel in Nenagh. This event was attended by our Chairman Denis Ryan with committee members Rose Crofton, Donie Walsh and Mary Buckley. Our award of a silver medal and citation was collected on behalf of Roscrea Tidy Towns by Mary Buckley.

At this event, Minister Michael Ring made the magnificent announcement that various sums of money were being “ring-fenced” for towns in Tipperary by way of commemorating the 60th anniversary of the National Competition. Roscrea Tidy Towns has been awarded €3,000 under this scheme. The paperwork for this allocation has arrived and following their return, the completion process will occupy us in 2018 as whatever we earmark in our submission here must be completed before end of July 2018.

Following continued representations by Roscrea Tidy Towns to local authority officers and officials of Tipperary County Council where we reiterated our concerns regarding the neglect of Roscrea over a long period and a subsequent appointment of a new engineer for the area, we have been reassured that 2018 will be much better for the town.

Among the improvements mentioned for completion in 2018 are enhancements to the Gantly Road Area.

A proposed provision of a Walkway & Cycleway around the town is also under consideration.

Council Officials have also confirmed that a new Litter Warden/Collector will be appointed early in 2018. With these and other plans together with the current improvement to the Templemore Road and the planned upgrades for Market Square, 2018 promises to be a very “prosperous” one for Roscrea.

As 2017 draws to a close, Roscrea Tidy Towns would like to wish all its members and supporters a very Happy and Peaceful Christmas and a most productive New Year.