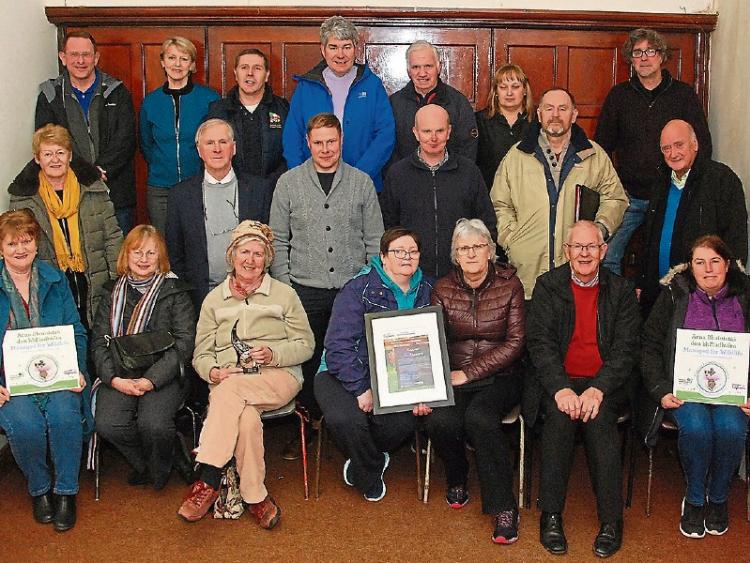 The AGM of Roscrea Tidy Towns took place in the Abbey Hall at 8pm on March 7th last. It was well attended with 35 in attendance and apologies from another four supporters.

The meeting began at 8pm and was chaired by Chairman Denis Ryan who welcomed all present. Denis stated that he was delighted to see such a big crowd once again in attendance. He said that a lot of people are buying in to the idea of Tidy Towns – especially residential estates. All augurs well for the future - “Nothing succeeds like success” he said and it is great to see so many representatives of our estates as well as public and political bodies.

Prior to the meeting starting he proposed votes of sympathy to the families of the following who had lost members since our last AGM: John Brereton, Oliver Egan, Susan Price, Alan Dunford and Eamonn Morrissey. These were agreed.

The Minutes of the 2017 meeting were read and as there were no matters arising they were then adopted.

The Chairman addressed the meeting. He reviewed the past year in the life of Tidy Towns. He stated that every year he seems to be repeating his comments – this year again we surpassed ourselves by increasing our marks yet again. This year, we achieved a silver medal – surpassing his expectations – he remarked that he personally thought it would be this current year before we would get awarded a silver medal. We now have achieved 313 points and there are only two other towns in the country in our category with more points than us – Monaghan (316) and Ardee (314). We’re on the verge of gold – Youghal which is in our category got gold with 318 points – and we should plan to achieve it this year.

To do this, we should address items that are mentioned in the adjudication. He went on to say that it was his belief that three areas that will make the most difference to our marks this year are Trees, Flowers and the buy-in by communities in the locality. He urged the Chamber group to encourage the trading community to install window boxes or hanging baskets to enhance the town centre. We are very lucky to have George Cunningham on board again this year and through his association with Crann to have so many trees at our disposal.

He thanked all officers, volunteers and collectors and those who manned the POP-UP Shop. We are a small group that does Trojan Work – the results will be evident in the Treasurer’s Report later. He particularly praised all those who turn up regularly on Saturday mornings and Wednesday evenings to do the day-to-day work. He thanked Billy Newman for looking after our Junior Group and Esther Mackey for organising the painting of the mural at Kilcummin’s Bakery. A word of thanks must also be extended to those who aided with the plantings of trees throughout the town. In particular, he thanked Doherty Bros and Standish Sawmills for their support for the initiative sponsored by Crann. He thanked our Community Forum Workers under the management of Paddy Reidy for the large amount of hard work they do on our behalf – from strimming and planting to litter picking and maintenance.

This coming year they are undertaking the early spraying of areas along the Dublin Road where we have planted hedging in order to save the volunteers from having to weed the rank grown that happens there. In thanking the Community Forum workers for their contribution to our efforts, Denis informed the meeting that the issue of litter is getting much worse – that the Community Workers often collect as many as 60 bags of litter on a weekly basis. Fly-tipping has become a large issue too. The Chairman informed the meeting that he had met with the new council engineer and he has committed to completing some works before adjudicating time arrives. He complimented Seán O’Connor and the rest of the Council ground staff who help us so much.

A new council employee has been appointed in Roscrea this year whose duty it is to empty the litter-bins and sweep the streets – this together with our own efforts, should keep the town centre in good order.