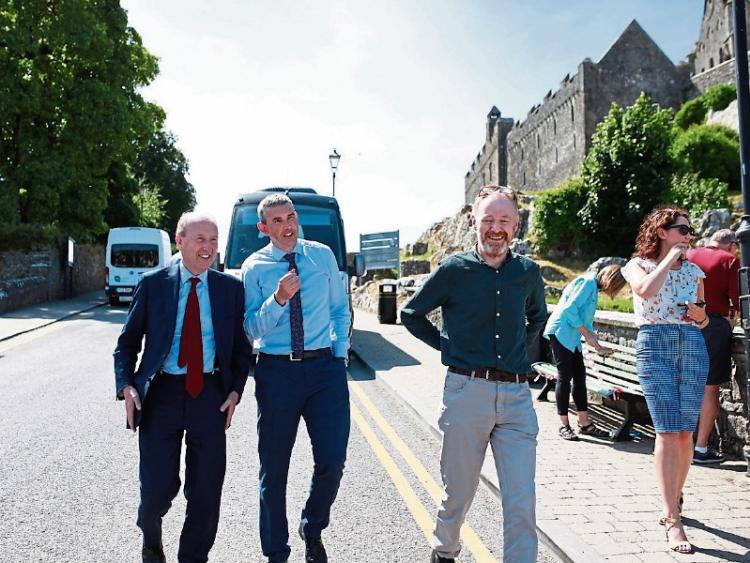 Minister for Transport Shane Ross, at the foot of the Rock of Cashel on Friday.

The two services consist of: Service 855 - T41Tipperary Town to Cashel via Cahir

This is a regular/commuter style service that links the three towns of Tipperary Town, Cashel and Cahir along with the intervening villages of Bansha, New Inn, Golden and Kilfeakle.

This service operates in a loop fashion allowing passengers to travel to and from the various villages and towns along the route. It also serves Limerick Junction Train Station.

The service was identified as an ideal service to pilot, particularly during the tourist season as each of these towns would have a significant number of tourists visiting the multiple historic attractions that exist along the route, and would perhaps encourage them to visit the areas outside of the towns.

This expansion will also provide an opportunity for the populations of the various villages to access the towns for social events and vice-versa such as those held in the Excel complex in Tipperary Town and Boru Boru Theatre in Cashel.

Passengers will not need to book their seats for this service as it will operate on a fixed route.

This is an expansion on an existing day time Demand Responsive Transport Service (DRT) provided through RIngalink which allows passengers located towards the western rural environs of Clonmel to book a seat in order to travel to the various villages and towns that it serves. Passengers will be required to book their seat at least 24 hours in advance in order to travel.

This service serves the areas of Ballyporeen, Burncourt, Clogheen, Ballylooby, Goatenbridge, Ardfinnan, Newcastle & Knocklofty and operates in a loop fashion allowing passengers to travel to and from the various villages and towns along the route, commencing in Clonmel and ending in Clonmel.

The service was identified as an ideal service to pilot, as it serves a large area with particularly good patronage.

This service is also attractive during the tourist season as each of these towns and villages have their own unique attractions and would perhaps encourage them to visit the areas outside of the towns.