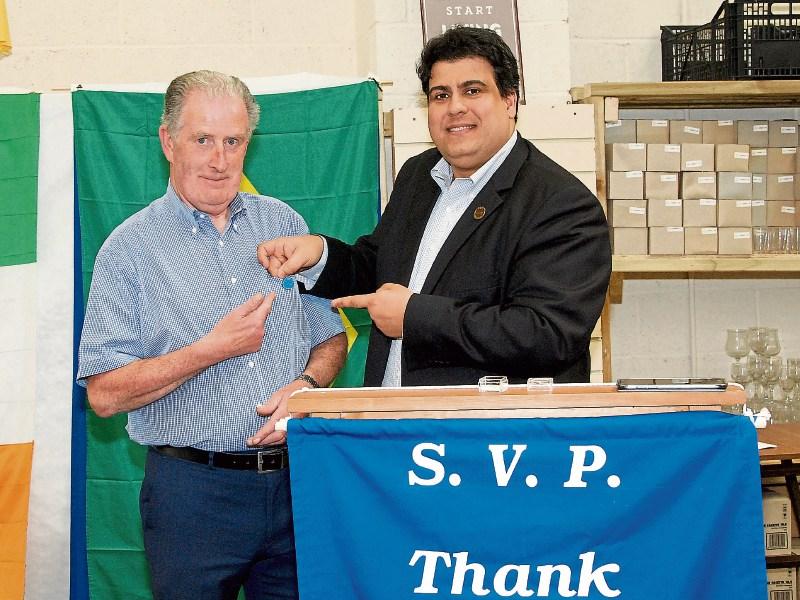 Mr. de Oliveria, himself an SVP Conference Member, hails from Brazilia, the capital of Brazil and was elected International President in 2017.

He attended an open meeting of the Conference where he heard details of the work that engages local Member, in assisting families and individuals in need. Canon Jane Galbraith, Church of Ireland welcomed him to Roscrea and was generous in her praise of the work carried out by SVP and her long association with the Society.

The Order Fulfilment Centre in Nenagh is a sorting depot for donations to the 20 Vincent’s Shops in the Region. This initiative is overseen by the Midwest Regional Vice President Pat Carroll and the Members of St. Christopher’s Conference of behalf of the Midwest Regional Council. Pat extended a warm welcome to Mr. de Oliveria and outlined details of the work undertaken at the Centre and the income generated through the shops which is passed on to the Visitation Conferences to assist those in need in the Midwest Region.

The next port of call for the SVP International President was the Regional Office, Ozanam House, Hartstonge Street, Limerick where Members from across the Region gathered with Regional Office Staff to meet and welcome him.

Mr. de Oliveria heard of special works that SVP in the Region undertake including the Drop In Service in Limerick City, Social Housing, Youth work in the secondary schools, the work involved in Twinning with Sierra Leone, and the two hostels for homeless men – in Ennis and Limerick City.

A special feature of his visit to Ozanam House was the rededication of the Chapel first dedicated in the late 1880s and used as such until 1919. The final stop in the tour of the Midwest was Clonmel where there was Mass in St. Oliver Plunkett Church followed by refreshments and the awarding of long service medals to Members from the South Tipperary Area.

The National President, Kieran Stafford was on hand with the South Tipperary Area President, Mary Stafford to extend a warm welcome on behalf of the Members and a large crowd turned out for the occasion. It was a great privilege for the Region to be included in the International President’s itinerary which also included the North of Ireland and Dublin.