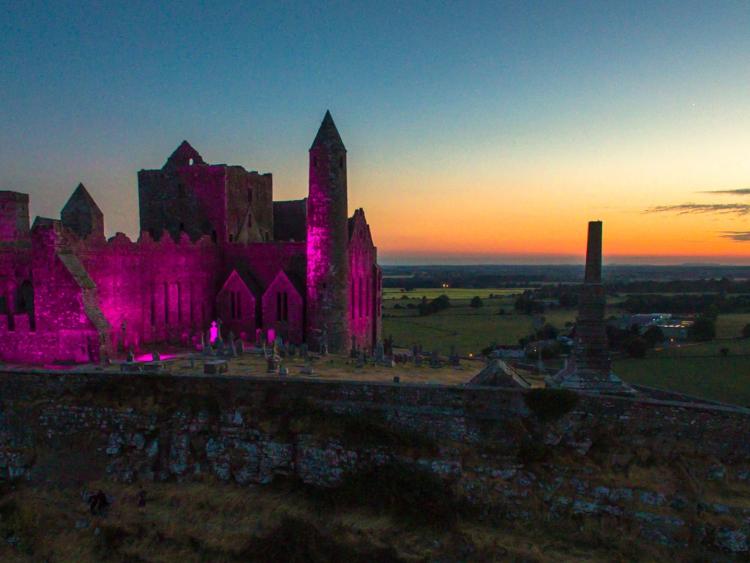 Extraordinary images have been captured from the air of the Rock of Cashel bathed in pink, taken by Aeriality Aerial Services.

Aeriality Aerial Services specialise in photographic and videographic services for real estate and event coverage in Ireland, and operate drones to capture stunning images of major monuments around the country. The Rock of Cashel was bathed in pink from July 10th to 12th in support of Breast Cancer Research.

It was all part of the Co. Tipperary Golf and Country Club’s ‘Play in Pink’ day on Thursday July 12th, hosted by Lady Captain Frances Boyle in association with Clann Hospitality at Dundrum House to help raise funds for Breast Cancer Research, a national charity based at the Lambe Institute for Translational Research at NUI Galway.

Supported by the Irish Ladies Golf Union (ILGU), 'Play in Pink' Days across Ireland raised €150,000 for Breast Cancer Research in 2017 and to-date they have raised over €630,000 for the charity.

With many club members, family and friend affected by breast cancer Lady Captain Frances Boyle felt this was the perfect way to help raise funds and awareness for research to help create better treatments and care while having a fun day out.

Tipperary people wore a touch of pink on July 12th to show their support for the event.  A public coffee morning was held for non-golfers while a Four Ball Better Ball competition for the Lady golfers and not forgetting the gentlemen, and they also played a Singles Competition on the day.

A fantastic selection of prizes was up for grabs including; Weekend Breaks, prizes for Mens Teams and Best Dressed Men in Pink.  The ladies will also be playing for a place in the ‘Play in Pink’ Final which will be held at Glasson Country House Hotel & Golf Club, Athlone on Sunday 14th October 2018.

Tee times can be booked on BRS or by calling Dundrum House Golf Club directly on 062 71116.  The entry fee is €15 per player. To learn more about 'Play in Pink' visit: www.playinpink.com