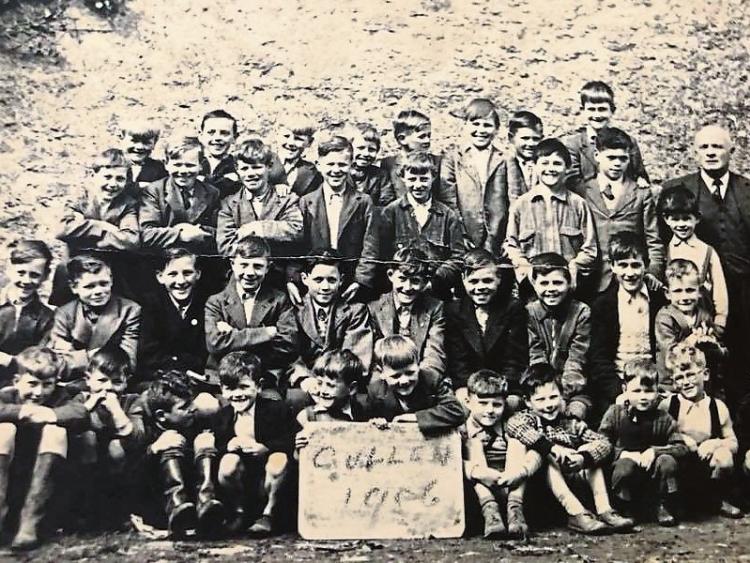 Caption included at bottom of story.

On next Sunday, 16th September, former teachers and pupils will return to Cullen to celebrate primary education in the village over almost two centuries.

The story of national education in Cullen began in 1844 when the then parish priest, Father James Hanly, submitted an application to the Board of Education requesting grant aid for the school. At that time the school was located within a former eighteenth century church building, which had been replaced a few years earlier by a new church on the opposite side of the road. The thatched roof was blown off the school during a storm in 1849 and it was decided, as a temporary measure, to move classes into the newly-built church. As Board of Education rules did not permit the holding of classes in a place of worship, central funding was withdrawn and Cullen’s national school status was suspended. A few years later, however, the school was completely renovated and national education resumed to continue down to the present day.

Father John Egan, P.P., Lattin and Cullen, said; I join with the community in celebrating this milestone in the history of the parish. I salute and congratulate the school, its staff, pupils and parents, the Board of Management, the Parent’s Association and all those involved in the school down the years. We all stand on the shoulders of those who have gone before us, we build on the foundations they have laid for us.

The day will begin with a special Mass at 1 pm in St Patrick’s church. This will be followed by a reception in the schoolhouse and the launch of a new book chronicling the school’s history through old photographs and recollections of its present and former pupils and staff.

Caption for photo above:

A Cullen/National School photograph from yesteryear. On Sunday next, 16th September, former pupils and teachers will return for a 50th Anniversary Reunion. See article below.