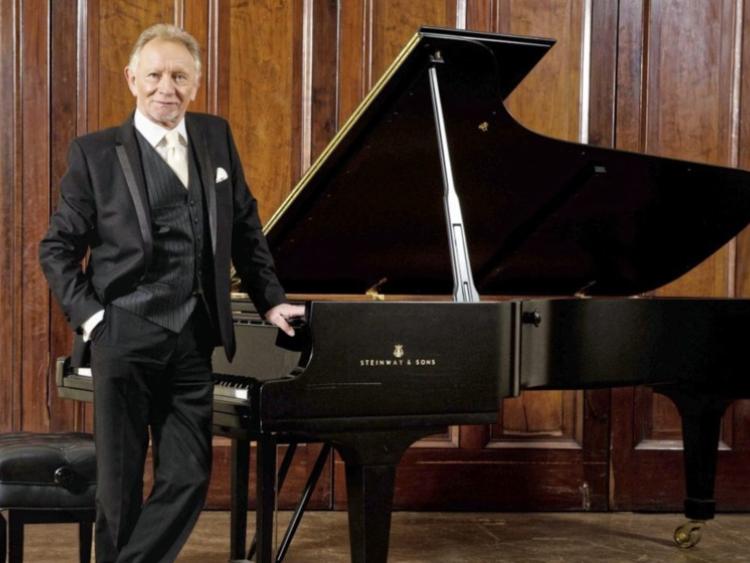 Phil Coulter, who will play in the Cathedral of the Assumption, Thurles on Friday next.

" It is going to be a memorable night and I get the sense that is not just going to be another concert in another venue" - Phil Coulter.

”It is a great pleasure to be invited to the Cathedral and something I don't take lightly. I hope it is going to be a memorable night and I get the sense that is not just going to be another concert in another venue - this is going to be something very special for Thurles.”
The words of internationally renowned singer, songwriter and pianist, Phil Coulter, who will throw open the doors of the magnificent Cathedral of the Assumption in Thurles for a first-of-its-kind celebration of his music in the principle Church of the Archdiocese of Cashel and Emly on Friday next September 28th and certainly set the scene for what will be a unique event - he will be accompanied by accomplished soloist Geraldine Brannigan.
The Derry born artist has amassed 23 platinum discs, 39 gold discs, 52 silver discs, two Grand Prix Eurovision awards; five Ivor Novello Awards, which includes Songwriter of the Year; three American Society of Composers, Authors and Publishers awards; a Grammy Nomination; a Meteor Award, a National Entertainment Award and a Rose d'or d'Antibes, and is one of the biggest record sellers in Ireland.
And, he has spoken this week of how his love of music was fostered in the home -where both his father and mother played fiddle and piano - and in school.
“I was lucky to have been born into the very musical city of Derry and one of the few entertainments we had was music. It was very much part of the fabric of life. There hasn't a day gone by in my life that I haven't thanked God that, for more than fifty years now, I have made a living from my talent. That is a gift from God - a rare privilege and I never take that for granted,” he said.
Acknowledging his teachers including Christian Brothers and St Colms school which produced two Nobel Prize winners in John Hume and Seamus Heaney, both of whom were just ahead of Phil in school, he went on to study music in Queens University, Belfast but quickly came to the realisation that he would be writing and making music, rather than teaching it - his love of pop music from the 50's and 60's had a huge influence as well.
Indeed, Phil's music has spanned a number of genres including classical, pop, rock, folk and traditional. He has also had considerable success in the Eurovision Song Contest with Cliff Richards 'Congratulations' being one of his big hits, as well as 'Puppet on a String' for Sandie Shaw which was the 1967 winner.
Having been associated with groups such as Planxty, Celtic Woman, Joe Dolan, Bay City Rollers, Sinead O'Connor, the Dubliners, Boyzone and many more, he really has been a tour-de-force in the Irish music scene.
But, Phil Coulter also has tremendous faith and his love of spiritual Church music shines through in his conversations.
“I have clear recollection of singing in the choir and Gregorian chant. I am a traditionalist when it comes to Church music. I am not a huge fan of dumming down Church music to reach a wider audience. It shouldn't be like McDonalds where you have to make it accessible to everyone,” he says.
So with such a wide music scope to choose from, what can those privileged ticket holders expect in the Cathedral of the Assumption on Friday evening.
“This will be a very intimate evening where my goal will be, that at the end of the evening, people will have spent an evening in my company - that they will know what makes Phil Coulter tick. That they will have got some kind of idea of the stories behind the music. It will be a very informal and relaxed evening. I will have to perform the Phil Coulter songbook which I have become known for, as well as some of the numbers which put me on my feet and on the trail,” he says. Though it has been some time since he came to Tipperary, Phil's wife has very strong Premier County connections - his wife's mother has many Slattery relations locally and he readily agrees to give a few bars of Silevenamon on the night in recogniation of the venue.
Speaking of the venue, Phil is really looking forward to the Cathedral experience. Having played on some of the biggest global stages including Carnegie Hall and the White House, he namechecks a concert he did in St Patrick's Cathedral with James Galwey as being one of his most memorable. Two men of different faiths, their collaboration and Phil's special concerts in the Bogside and Shankill - two ends of the political spectrum in Northern Ireland, were seen as being very significant symbolically in terms of bringing the communities closer together.
Perhaps this led to his selection to pen Irish Rugby Football Unions politically neutral anthem for the Ireland national rugby union team, which represents both Northern Ireland and the Republic of Ireland. The result was "Ireland's Call", which is played alongside, and in some cases instead of, "Amhrán na bhFiann". As well as being used by both the Ireland national rugby union team and the junior national teams, "Ireland's Call" has since also been adopted by the Ireland's national hockey, cricket and rugby league with world renown singing group Celtic Thunder taking it on as one of their leading anthems.
Asked, of all musicians or performers, who he would loved to have performed with, Phil Coulter points to a man whom he claims does not get enough credit for transforming Irish music - Seán Ó Riada.
“His music was a revelation to me - a kind of road to Damascus. I don't think he gets enough credit for transforming Irish music and this whole Celtic phenomenal which stretches around the world now - it would not have happened without him. To me he is an iconic figure and if there is someone I would loved to have played with, it would be Sean O'Riada,” he says.
Tickets for the concert in the Cathedral of the Assumption, which is a fundraiser to kickstart the process of replacing the roof, are still available from the Parish Office, opposite the Cathedal in Thurles.
But move fast, as they are selling out very quickly as enthusiasts avail of this unique opportunity to attend a music legend in Thurles.