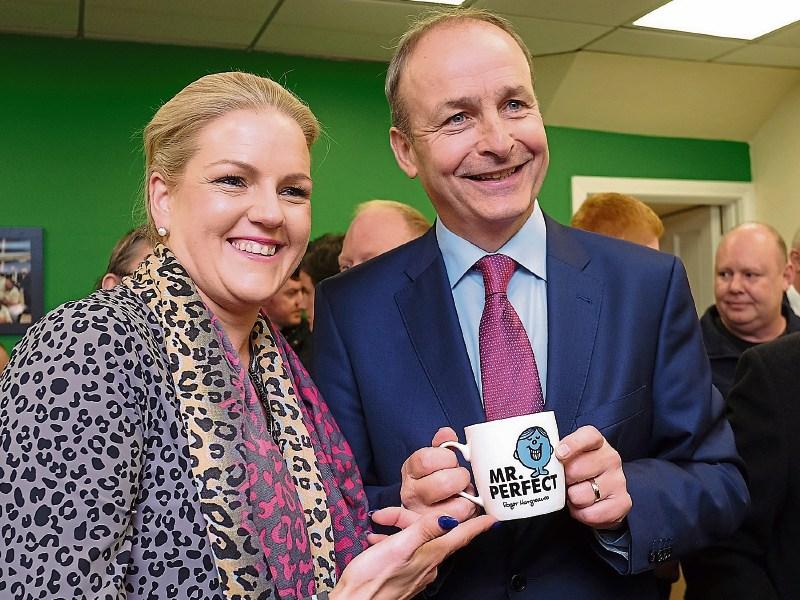 Fianna Fail may yet add a third name to the party’s ticket to fight the next general election in Tipperary, party leader Micheal Martin has stated.

“We have a national constituencies committee. They will keep this under review. We will see what unfolds,” Mr Martin told the Tipperary Star when he officially opened a new constituency office for election hopeful Sandra Farrell in Nenagh.

Ms Farrell, a former Labour Mayor of Nenagh, was added to the ticket following the local convention. She now joins sitting TD Jackie Cahill in the party's bid to take two seats in the constituency.

With Fianna Fail having two candidates in the north end of the constituency, and Fine Gael with two in the south, Mr Martin was coy on agreeing they had divided the county up between them.

“I think what you are witnessing in Tipperary is Jackie Cahill is a very strong candidate. Sandra, since she got elected to the national committee, has made her presence felt. There is the sense of an interesting candidate here. Sometimes that dictates strategy too. Quality people emerge on to the political landscape. Let’s give options to the electorate. I think that is what is manifested by Sandra’s nomination,” he said.

Ms Farrell was not just there to pick up younger votes and the female vote, he said.

“She will also appeal to elements of the electorate that want something fresh and new in terms of politics,” said Mr Martin. “I know a good candidate when I see one.

“Tipperary was traditionally strong for the party and what we are about is reclaiming that,” he added.

Listing health, housing and jobs as priorities, he pointed to the IDA's two visits to Tipperary in 2018, and said the jobs agency had only visited Tipp eight times out of 200 site visits in 2017.

However, on health, Mr Martin said it was “unfair” to blame Fianna Fail for the downgrading of Nenagh Hospital, when it was put to him that it had happened under the watch of former TD Maire Hoctor.

"I don't accept that," he declared. "It think that is unfair to Maire."

Mr Martin said that in health care specialism was driving health care from the medical side.

"The colleges are dictating. We are having problems retaining doctors. Clonmel is under pressure, in terms of getting posts and so on. National strategies were driving care towards tertiary centres and likewise in emergency departments with the result the tertiaries have become overcrowded. There is a problem there. When you meet the heads of colleges, the A&E consultants they insist that is the best way of doing it. Politicians don't govern everything in health in that respect and some of them claim they did and subsequently when they got into power they couldn't reverse what they thought they could reverse," said the Fianna Fail leader.

“Under reconfiguration, the one area that is clearly not working is A&E in terms of overcrowding. There will have to be a review because Limerick is overcrowded,” he said.

“We actually invested a lot in Nenagh when I was Minister for Health. We increased the number of people working in Nenagh,” said the party leader.

He said that be entering the confidence and supply deal with FG, “we put the people first”. However, he admitted that it had been difficult.

On housing, he said local councils should be given the money to build more social and affordable houses.

He described the bureaucracy surrounding the council building houses as “just mad”.

Ms Farrell said that her campaign would be based around showing there was a better way for Tipperary.

Ms Farrell said that the Fine Gael Government had “left thousands behind them”, and that was plain to see in the numbers availing of the food bank she had set up in Nenagh.

“Unemployment is 34 per cent in Tipperary Town, 29 per cent in Carrick-on-Suir and 20 per cent in Roscrea and Nenagh,” said the election hopeful.

She declared Fianna Fail had met its targets when it came to rolling out broadband .

Deputy Cahill said that the objective was to make Mr Martin Taoiseach after the next election.

“Not so long ago we had four out of seven Tipperary seats. The FF vote is still there,” he said.