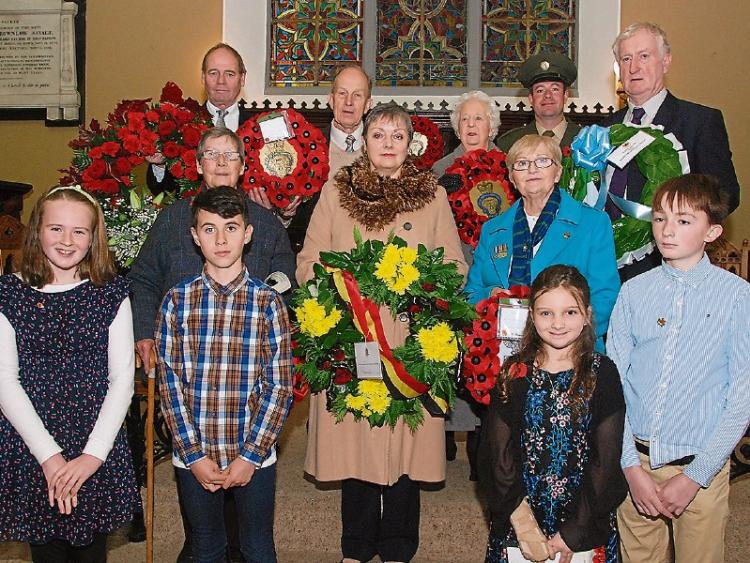 Family and friends of the Shinrone Heritage Group. Full caption in this week's Tipperary Star.

On Sunday last, Armistice Day, St. Mary’s Church of Ireland, Shinrone was the beautiful setting for an Ecumenical service of Remembrance where a poignant tribute was paid to the men and women of Shinrone and District who served in World War I.

The event obviously struck a chord with many people as the Church was full for the service which began before 11am. Included in the congregation were many family members of the men who died and also of those who returned to a completely changed Ireland.

At 11.00 am Church bells rang out in remembrance of the dead. Following the Exhortation which was ready by Mr Seymour Kenny, the Last Post and Reveille were sounded by Mr Ollie Grace. Two minutes of silence were observed.

Following this, wreaths were laid at the Altar by Michael Leonard representing Shinrone Heritage Group, Ms Mabel Wallace and Lee Deane representing the Relatives of the War Dead. Ms Wallace is a niece of Cecil J Kenny, who died on 24th March, 1918 and Lee Deane is a relative of John Shanahan who died on 17th August 1917 and Patrick Shanahan who was killed on the 24th March, 1918.

Local children Claire Flannery, Adam Stanley, James Morkan and Olivia Foote called the names of thirty eight men from Shinrone and surrounding area who died in “the war to end all wars.” Included were four members of the Benson family, whose parents, James and Catherine, were teachers in Cloughmoyle National School, Shinrone.

Canon Ruth Gill spoke of the heroism of the men and women. Mr Jim Feighery recalled the names of ten men who survived the war and returned to their families and also of two war chaplains from Mt Saint Joseph Abbey, Roscrea, and thanked Heritage Officer Amanda Pedlow.

On behalf of Shinrone Heritage Group, Chairman Michael Leonard thanked all who helped, including the main sponsors Liffey Mills and Grant Engineering.