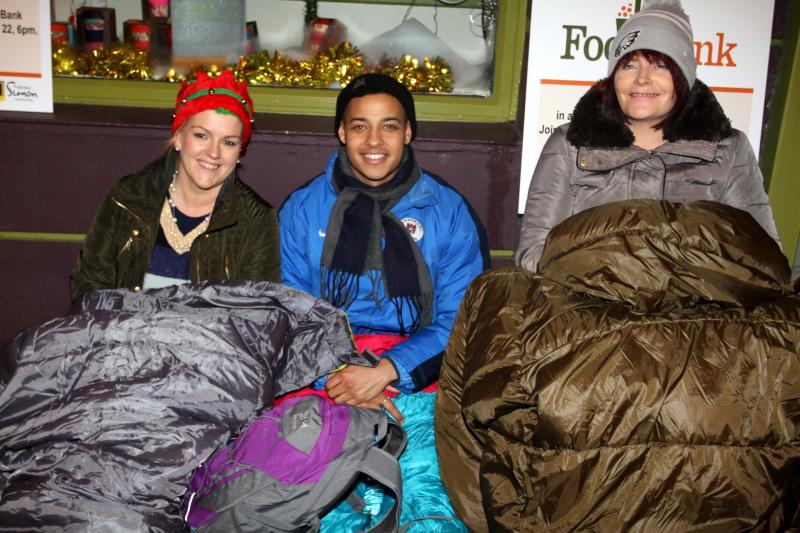 Sandra Farrell and her mother Theresa, with Nenagh actor Daryl McCormack during #TheBigSleepOut in Nenagh

Torrential rain failed to dampen the Christmas spirit of a brave number of volunteers who slept out in Nenagh over the weekend to raise funds for the homeless.

A dozen people, including Nenagh actor and Peaky Blinders star Daryl McCormack, joined Sandra Farrell on Pearse Street for #thebigsleepout, which began at 6pm on December 22.

The sleepers stayed out in the pouring rain until 6am on Sunday, raising €3,000 in the process.

The event was to highlight and raise funds for Mid West Simon and Nenagh Food Bank, which was set up by Ms Farrell, a Fianna Fail candidate in the next general election.

"We are very grateful to all the volunteers who slept out on what was an awful rainy and cold night. It gave all of us a real insight into the plight suffered by so many who are homeless today. It also gave us a great sense of camaraderie, and we managed to raise more than €3,000 in total," Ms Farrell told the Tipperary Star.

She said that there were huge crowds out in Nenagh on Saturday, between shoppers and those in town to watch the EMBRACE Farm fundraising tractor run.

“There were big crowds in town on Saturday and other charities collecting, so we were conscious not to interfere with those charities and also that the people of Nenagh were facing a lot of requests, so we were delighted to get the response we did. I’m eternally grateful to Nenagh Choral Society, who raised €1,000 by performing their charity single, The Homeless Man, in local pubs. They entertained us and passers-by and kept us going," she said.

Daryl, one of Ireland’s rising stars, best known for his role in Vikings, returned to his native Tipperary for Christmas and joined the charity drive along with his proud mum, Theresa.

“It was hard to sleep out from 6pm to 6am, but it gave us all a better understanding of just how difficult it is for some people in society. Raising a few thousand euro will help Sandra continue to provide services at Nenagh Community Food Bank. I was happy to help out and I will be keeping an eye on things when I go back to London because I know Sandra and volunteers in Roscrea are campaigning for enough funding to set up a permanent food bank there too. Hopefully, we can help make that happen, too," he said.

Ahead of #TheBigSleepOut, Ms Farrell and volunteers from Roscrea held a pop-op food bank in Roscrea, handing out 40 food parcels to families in need. They used food donations from the public and also from Nenagh retailers Sheedy’s Centra and O’Connor’s supermarket.

“There is demand in Roscrea for a permanent food bank, but, unfortunately, we have to wait until next year to hear whether we can get EU funding for one. This pop-up food bank in the Scout’s Hall, Roscrea on December 22 was the best we could do to help families this side of Christmas. Hopefully #TheBigSleepOut has also highlighted the need in Roscrea, as well as helping to sustain the Nenagh Community Food Bank," said Ms Farrell.

“I wish it wasn’t the case but, as we have seen with Nenagh Community Food Bank where we help approximately 500 people a fortnight with their weekly food supplies, demand is growing in Roscrea. We will need to secure EU funding next year to have a permanent food bank in Roscrea. I will be working with Mid West Simon to try and make this happen,” Ms Farrell said.

The community work wasn’t over after the food drive, as Ms Farrell and several of her volunteer team, are also responsible for organising the annual Nenagh Community Christmas Dinner, where 150 guests were expected to avail of a free meal and company on December 25 in Nenagh's Scouts Hall and through their meals-on-wheels initiative.