Tipperary students add a splash of colour to Tenerife festival 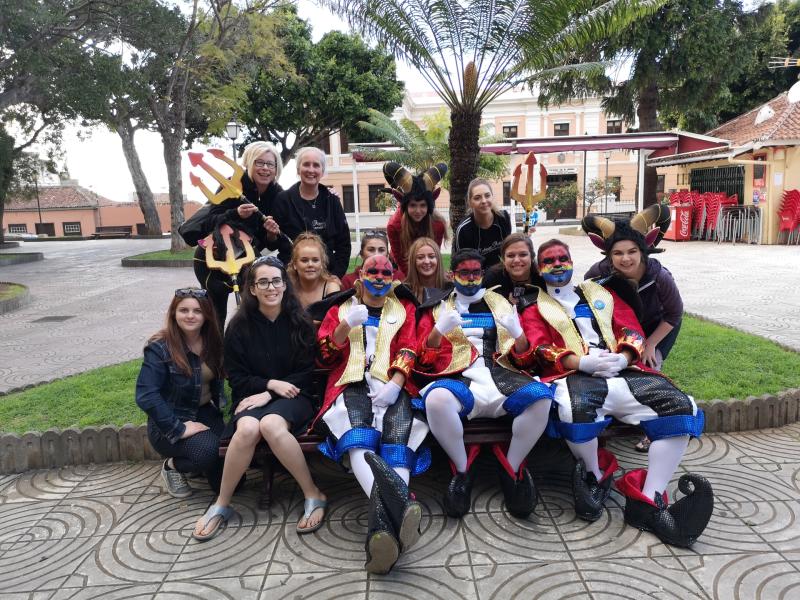 A group of 10 students from Templemore College of Education have been busy designing the special effects makeup for a major carnival-style festival in Tenerife.

The students, who are part of the beauty / therapy, hairdressing and media and makeup artistry courses in the college, have been on the Spanish island for the past three weeks under the Erasmus programme funded through Léargas and are due back in Tipperary this Thursday, March 7.

Among those taking part is well known local artist Gerardine Wisdom from Terryglass and her daughter Cecily. Gerardine is known for her sculptures made from reeds, which has exhibited in many arts festivals.

She explained that she is taking part in the media, makeup artistry course while Cecily is studying beauty therapy at the same college.

“We did the makeup for 55 men who were taking part in the singing competition in the festival. It was complicated face paint,” she said.

Gerardine is involved in doing the makeup for local musical societies and drama groups around Tipperary and hopes to put her talents to more use when her course is finished in May.

Taking part in the festival was a “big learning curve”, she said, especially having to put on makeup for a large group with limited facilities. “It was a very good experience and an eye-opener being thrown in at the deep end.”

However, when she graduates from Templemore in May, Gerardine has no intention of going into makeup artistry professionally and wants to continue concentrating on local groups.

“I just hope to do it better than before. I have enough stress,” she laughed. “I will stick to my own art.”

Mr Lenihan said the college had been sending students to Tenerife, with a partner agency on the island, for the past few years to do makeup for the Murga Los Chinchosos festival.

“It’s a massive festival, like a 10-day St Patrick’s Day, with singing competitions between neighbouring towns. The makeup is so strict that they have to use rulers to make sure all the faces are identical,” he said.

Mr Lenihan said that Templemore sent many students abroad on courses, and that 10 students were due to go to Germany in the next few weeks.