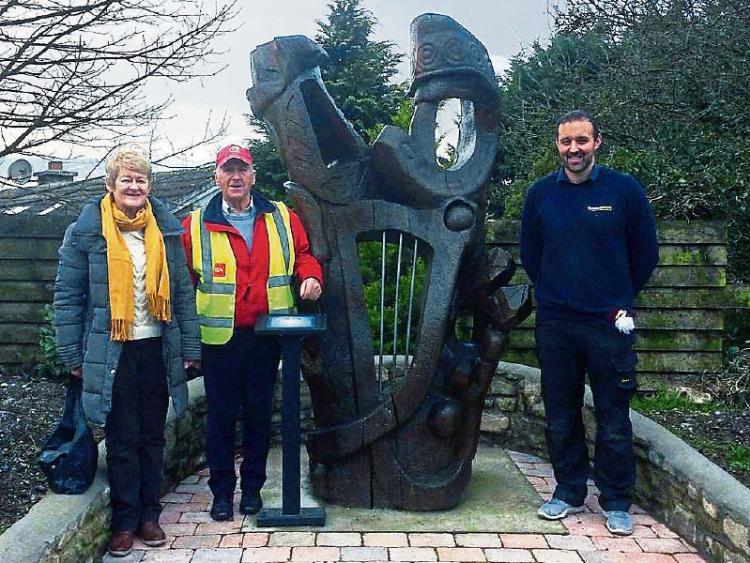 For many years now, Roscrea Tidy Towns has been blessed to have the support of many different individuals, businesses and groups.

Last year, we were very well aided in our labours through the efforts of the businesses in Rosemary Street and Castle Street as well as a large number of residential associations.

We look forward to their continued support this year as we strive to better the environs of Roscrea for citizens and visitors alike.

Two supporters in the past year worthy of special mention are Doherty Brothers Hardware and the local branch of Crann. Doherty Brothers donated a sculpture which was installed on the Railway Bridge at Cluain Bán. The photograph above shows the official handover which took place on March 6 this year.

Last year we were also greatly supported by the local branch of Crann in the person of Mr George Cunningham, who purchased over 4,000 trees for us. At our recent AGM, members attending were informed that some €7,000 had been spent by Crann on behalf of Roscrea Tidy Towns for which we are most grateful.

Over the years since it began in 1986, Roscrea has taken part and got much recognition in the National Tidy Towns Competition. In recent times - since 2013 – we have figured highly in this event receiving a total of four bronze and one silver medal in the competition. Our mark of 318 points last year (2018) represents our highest score in the competition to date for which we received a bronze medal.

The competition is high and this score would have earned us a gold medal in 2017.

Each year it gets harder to gain marks as we get nearer to the top scores. It is also important that any marks we are awarded we keep so this leads to a lot of maintenance work annually. Anyone can join in with us – we meet each Saturday at 10 am at the Fountain in Rosemary Square – if you have an hour or two to spare, why not come along and join a winning team?