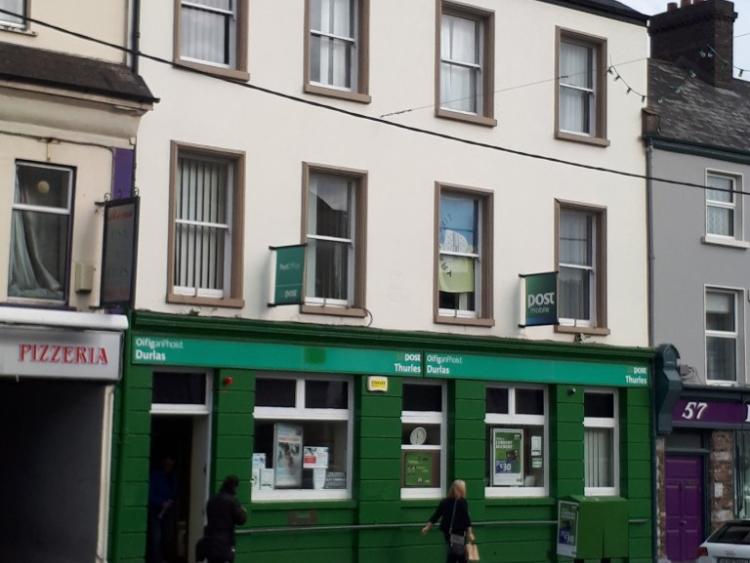 Thurles Post Office which is to be relocated to Liberty Square

Representatives of An Post left members of the Thurles delegation 'deflated' following their meeting on the proposed move of Thurles Post Office from Liberty Square to Thurles Shopping Centre.

The meeting, chaired by Independent Councillor Jim Ryan,  took place at the Horse and Jockey yesterday afternoon, and while a number of proposals are to be examined and looked into by An Post, representatives of the semi State company did inform the delegation that an agreement has been signed with Thurles Shopping Centre in relation to their occupancy of a large unit - no works have been undertaken yet at the unit, we understand.

Members of Tipperary County Council, four TD's, business representatives and others formed the delegation which met with An Post for two and a half hours and all had their say on the proposed move, informing the An Post bosses exactly what they thought of the proposal. And, a number of alternative proposals were also put forward.

Jackie Cahill T.D. proposed that An Post meet with a local Thurles Businessman who is willing to purchase the listed building on Liberty Square, renovate it to the highest standard, and lease it back to An Post. He said he was very disappointed  that An Post offered no credible financial case to justify their plans to abandon Liberty Square.

"€8 million will be spent on rejuvenating Liberty Square which will increase the footfall and satisfy An Posts business plan to increase their activity at Thurles Post Office. I have a business man who has agreed to invest in the Post Office, make it suitable for staff and customers alike, therefore there is no credible reason for An Post to move. AIB and Bank Of Ireland have renovated their branches on Liberty Square in recent years to a very high standard and have achieved it without closing their doors for one day," he said.

Deputy Michael Lowry also sought a commitment from An Post to speak to another interested property owner on Liberty Square who is willing to engage with the company.

The committee will meet over the next few days when decisions will be made on where to go next in the fight against the move. A meeting with the Minister for Communications, Richard Bruton and a public march could well be on the cards in the coming weeks, we understand.