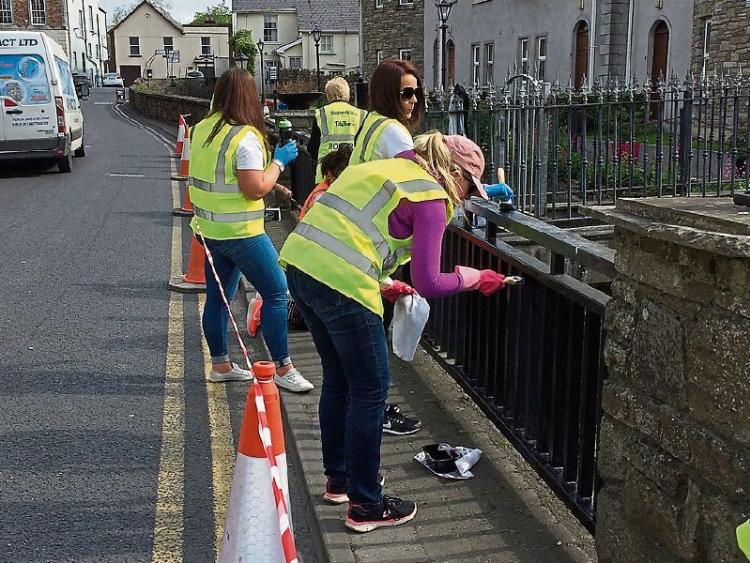 This time of year is arguably the busiest for Roscrea Tidy Towns as the deadline in June approaches for judging in the national Tidy Towns competition.

Plans have already been made for floral plantings: weeding and tidying of existing plantings is well underway and many litter-pick campaigns including the ‘keep Tipp tidy’ and spring clean have taken place.

Last week we saw a great Meitheal as volunteers from Turas Nua joined us to paint railings at the Mall and at the post office. It goes to show that when a large number of people attack a problem, a difficult job for a few can be done in a very short time indeed.

The next major effort is planned for Wednesday, June 5 next, when Tidy Towns members will be out to clean the streets of Roscrea in their annual ‘big sweep’.

They are hoping to be joined by as many clubs, organisations and business people as possible in an effort to get the town looking its best prior to both the adjudication and the summer visitors’ arrival in Roscrea.

We normally get Main Street, Castle Street, and Rosemary Street, swept and cleaned and would love the be able to do the same for Limerick Street, Abbey Street, Green Street, and all other streets too, but this depends on a large turnout of volunteers from organisations other than ourselves turning up on the night. Assembly is at the fountain in Rosemary Square at 7pm on Wednesday, June 5, and all you need to bring is a brush and gloves.

If you have an hour or two why not join us in helping make Roscrea a better looking place to live?