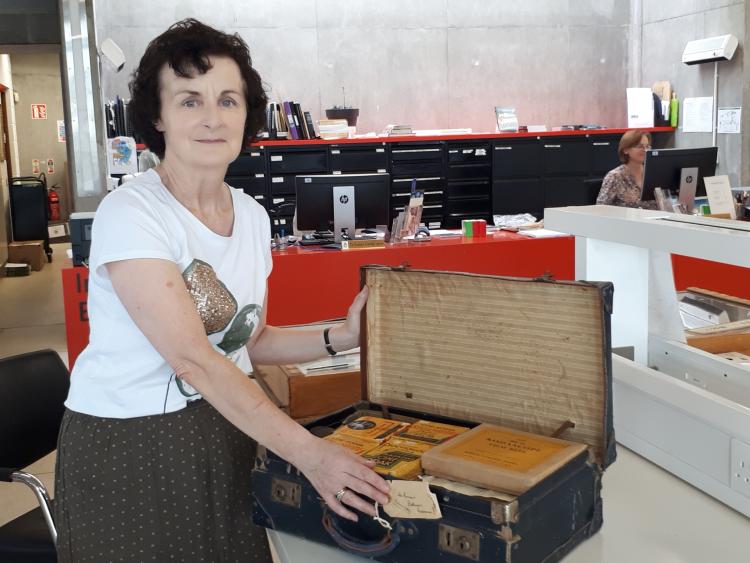 Librarian Mary Guinan Darmody from Tipperary Studies at the Source Arts Centre, Thurles pictured with the suitcase of films

Rare film footage depicting rural life in Tipperary almost 90 years ago has been digitally preserved and made available to the public by Tipperary Studies.

Up until last year, the socially and culturally rich films were stored in a suitcase in an attic until they were donated to the Tipperary County Library who immediately set to work preserving the decades old footage.

The films were shot by Captain William D.A. Kemmis who served with the British Army and married Winona Rosalie Armstrong of Moyaliffe House outside Thurles in 1927.

After the last of the local Armstrong family passed away in the early 80's, the suitcase of films were handed to Mick Barry from Clonoulty who safely stored them in his own home.

In 2018 his wife Kitty brought the suitcase to Tipperary Studies who sought the help of a Dublin based company specialising in digitally transforming 16mm reels.

The new additions to the digital archives at the library contain short films on air shows, horse racing, footage of the Coronation of their Majesties King George VI and Queen Elizabeth, and farming practices in the 1930’s including footage of hay making at Moyaliffe.

In all, the suitcase contained 27 reels of 16mm and 35mm films, including a film of Captain Kemmis’ own wedding.

The short clips have been heralded for their cultural significance and librarian Mary Guinan Darmody says it is hoped this latest discovery will encourage others to come forward with their own historical documents, photos or artefacts.

“It is wonderful to know that these film reels will remain in Tipperary as they are of tremendous local interest. They will be kept safe and are now available to the public through our digital archive and website.”

“It is amazing to think they lasted so well in the suitcase and makes you wonder what else could be out there in someone's attic,” she says.