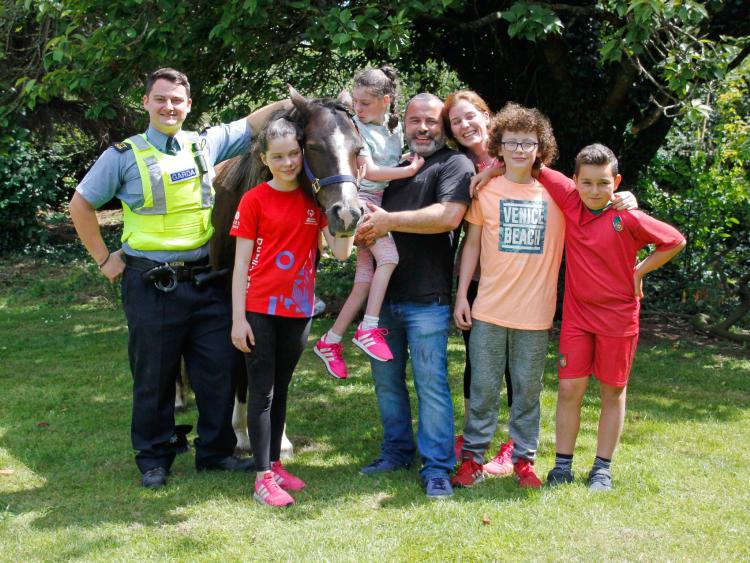 The scenes of joy that unfolded when a young Clonmel girl was reunited with her therapy pony has touched people all over the world.
Cream, a pony stolen from Knocklofty outside Clonmel, and thirteen year old Erin, who has cerebal palsy, and her family had an emotional reunion following the rescue of the animal in Cork city.
Erin's father Anthony Fitzgerald, who lives in Clonmel, said the smile of Erin as she looked around to see the joy on everybody's faces at the reunion was something that would live with him for ever.
“It was amazing to see Erin's face, the smile , and the way she could see the joy on everybody's faces. Erin has a great bond with Cream. Cream could not have been replaced, we had to get her back” said Anthony whose partner Jane, Erin's twin Anastasia and brother Anthony were all thrilled to see Cream again.
That happy reunion took place less than twenty four hours after the family decided to go public in their quest to find Cream (so named because her mother was Peaches) which had been taken from land in Knocklofty some days previously.
Cream, who is with the family since she was born eight years ago, was removed from the land on a Saturday evening and the family decided to make a public appeal through social media, print and television on Wednesday of last week and Cream was found in the early hours of Thursday morning.
An estatic Anthony received a phone call at ten minutes to two in the morning to be told the good news.
“The power of the social media, the newspapers, radio and television. It was on RTE and BBC, was just phenomenal, it was incredible to witness just how powerful the media was and to see the amazing response to the appeal” said Anthony.
He paid tribute to Gda Jamie Ryan in Cahir and the gardai in Cork for the important role they played in finding Cream and bringing her back to the family.
“Jamie and all the gardai involved in Cahir, Clonmel and Cork were just fantastic. They did everything they could possibly to track Cream down.
Gda Jamie Ryan said there was a magnificent response to the garda appeal once the decision was taken to go public with the appeal.
“It was a priority case. Shortly after the appeal went out it was obvious that so many people wanted to help and we received a call about a horse in a field in Cork City” said Gda Ryan who praised the work of a colleague in Cork who walked Cream a few miles from the field back to Mayfield station on Thursday morning.
“They gave Cream plenty of water and grass. It was a team effort, the public were absolutely brilliant to co-operate and help us with the investigation” said Jamie.
“I was thrilled to be able to ring Anthony just before 2am last Thursday morning.
We would not have got Cream back were it not for the response of the public” he said.
Gda Ryan issued an appeal to motorists who were in the Knocklofty area last Saturday week, June 29 to come forward with dash cam footage they may have which they would need to look at as part of their investigation.