Celebrations were held in the Aghancon Community Hall, on Tuesday, July 30 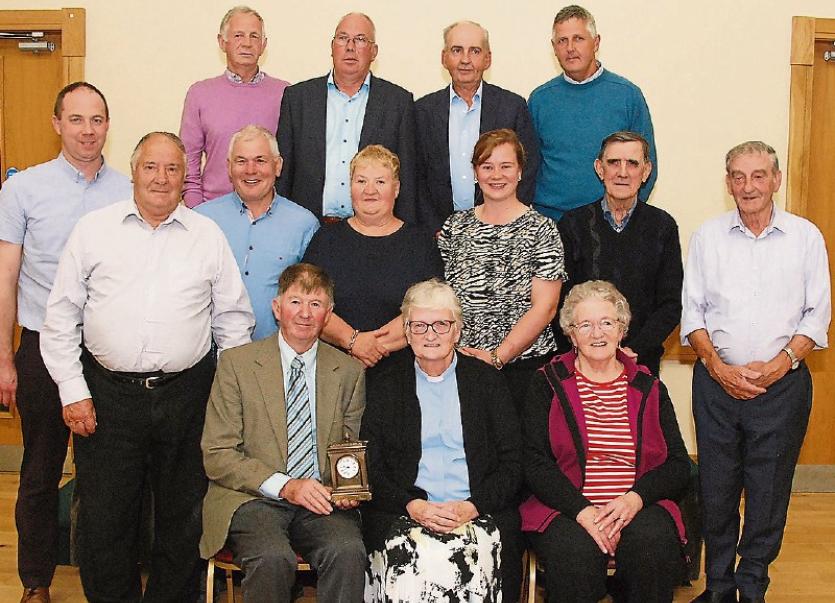 Presentations were made to Rev Canon Ruth Gill, rector of Shinrone Group of Parishs who will be retiring on August 7, were members of the Ploughing Association PICTURE: PJ WRIGHT

Shinrone was en fete recently for the retirement of Reverend Canon Ruth Gill from the Shinrone Group of Parishes.

Celebrations were held in the Aghancon Community Hall, on Tuesday, July 30.

Host for the evening Ray Dempsey opened by extending a very warm welcome to everybody, particularly to welcome Canon Ruth’s family, her husband George, her son John, his wife Edel and their children. Canon Ruth’s daughter June sent her best wishes as she was unavoidably absent.

The evening’s speakers included Mr Alan Algeo, on behalf of the parish readers in the Shinrone Group of Parishes, and Fr Kieran Blake, PP Kilcolman, Coolderry and Ballybritt, both of whom gave their thanks to Canon Ruth for her friendship and support as they worked together in the local community.

Mick Leonard, chairman of the Shinrone Heritage Society, spoke of Canon Ruth’s work with their society which enabled the commemoration service for the 100th anniversary of WWI last November to have been such a success.

Mick also made a presentation on behalf of the Shinrone Heritage Society.

Fr Michael O’Meara, PP Kinnitty, thanked Canon Ruth for the joy and happiness that he shared with her in their ministry in Kinnitty.

Jonathan Murray, chairman of the South Offaly Ploughing Branch, thanked Canon Ruth for her support, help and attendance each year in participating in the blessing of the ploughing site. Jonathan was joined by Mr Ritchie Mitchell in making a presentation to Canon Ruth.

Ray Dempsey, chairman of the Community Threshing Festival Committee, thanked Canon Ruth for her support and her annual nomination of a charity to receive donations from funds raised locally.

Fr Tom Hogan PP, Birr Parish and Cluster, thanked Canon Ruth, commenting on her ecumenical spirit and wished her well as she moves on to the next phase of her life.

Mr Jim Feighery a member of the Shinrone Heritage Society spoke of how he met Canon Ruth in the very early stages of the idea of having a WWI commemoration service, and how she supported the idea and helped transform it into a reality.

It was such a huge success for which he was honoured with the Offaly Person of the Year award.

Ray Dempsey, on behalf of the parishioners of the Shinrone Group of Parishes, also thanked Canon Ruth for her Ministry throughout the past three years when she supported us during times of bereavement and times of celebration.

He concurred with the previous speakers in identifying the joy and happiness that Canon Ruth always portrayed.

In conclusion, he wished Canon Ruth good luck and good health for the future.

A presentation from the parishioners was made on their behalf by Iris Peavoy (Kinnitty), Eileen Patterson (Shinrone), Willie Grant (Dunkerrin), David Talbot (Aghancon).

Canon Ruth replied by thanking everybody for attending and all the speakers for their kind words, and said she very much appreciated the tributes that were made to her and the support she received from all the clergy of the area.