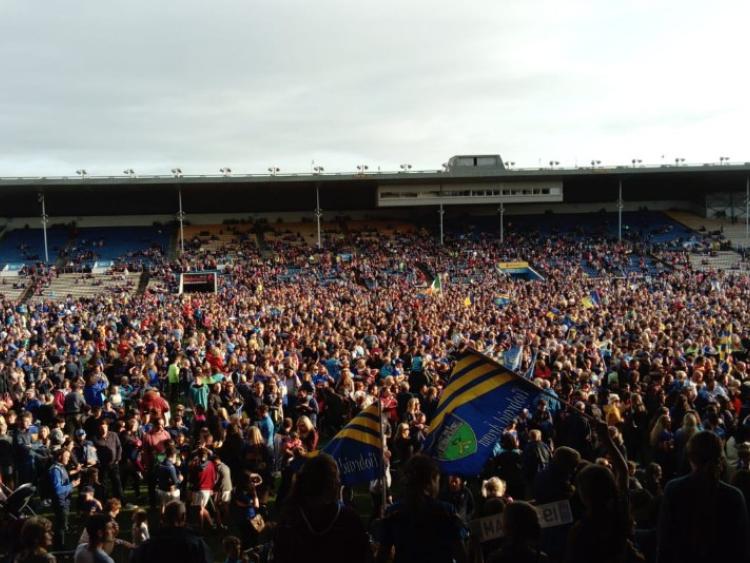 An estimated 30,000 strong crowd filed into the hallowed grounds of Semple Stadium on Monday evening in honour of the All-Ireland senior hurling champions who triumphantly carried the Liam MacCarthy Cup home to the birthplace of the GAA. 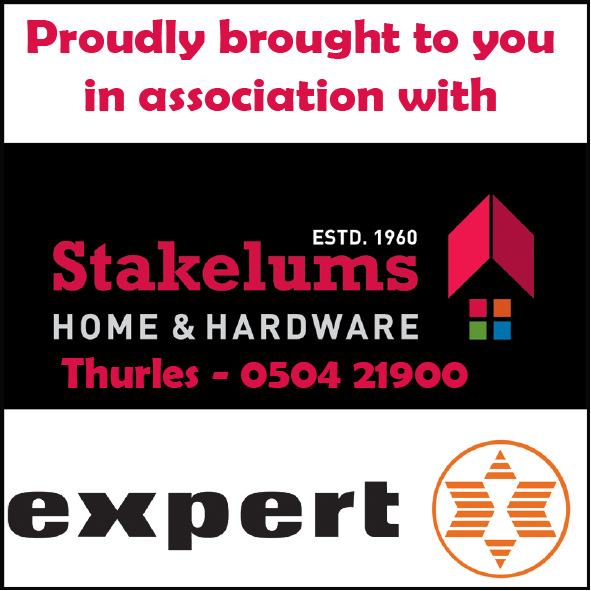 The victorious players received an ecstatic welcome from the moment their bus pulled into the Cathedral Town with fans and well wishers lining the streets to greet their sporting heroes following their spectacular 3-25 to 0-20 win over neighbouring rivals Kilkenny on Sunday in what would be their 28th All Ireland hurling title.

Blue and gold bunting and flags proudly adorned houses and shop fronts as a steady stream of fans made their way towards Semple all afternoon, most wearing some form of their beloved county colours. Some youngsters clutched hurleys and sliotars, hopeful to catch a second or two with members of the victorious squad for the all important autograph.

Among those in attendance were two of the Premier County's biggest fans Vincent O’Connor from Cashel and Bridget Ryan, Clonoulty both proudly donning their county colours.

“I haven’t missed a championship match since 1958. I said from the start that Tipp would go all the way this year,” said Vincent who himself donned the blue and gold jersey as part of the Tipp minor panel in 1968.

“We eat, sleep, drink and breathe the GAA. We couldn’t be more proud,” said Bridget. 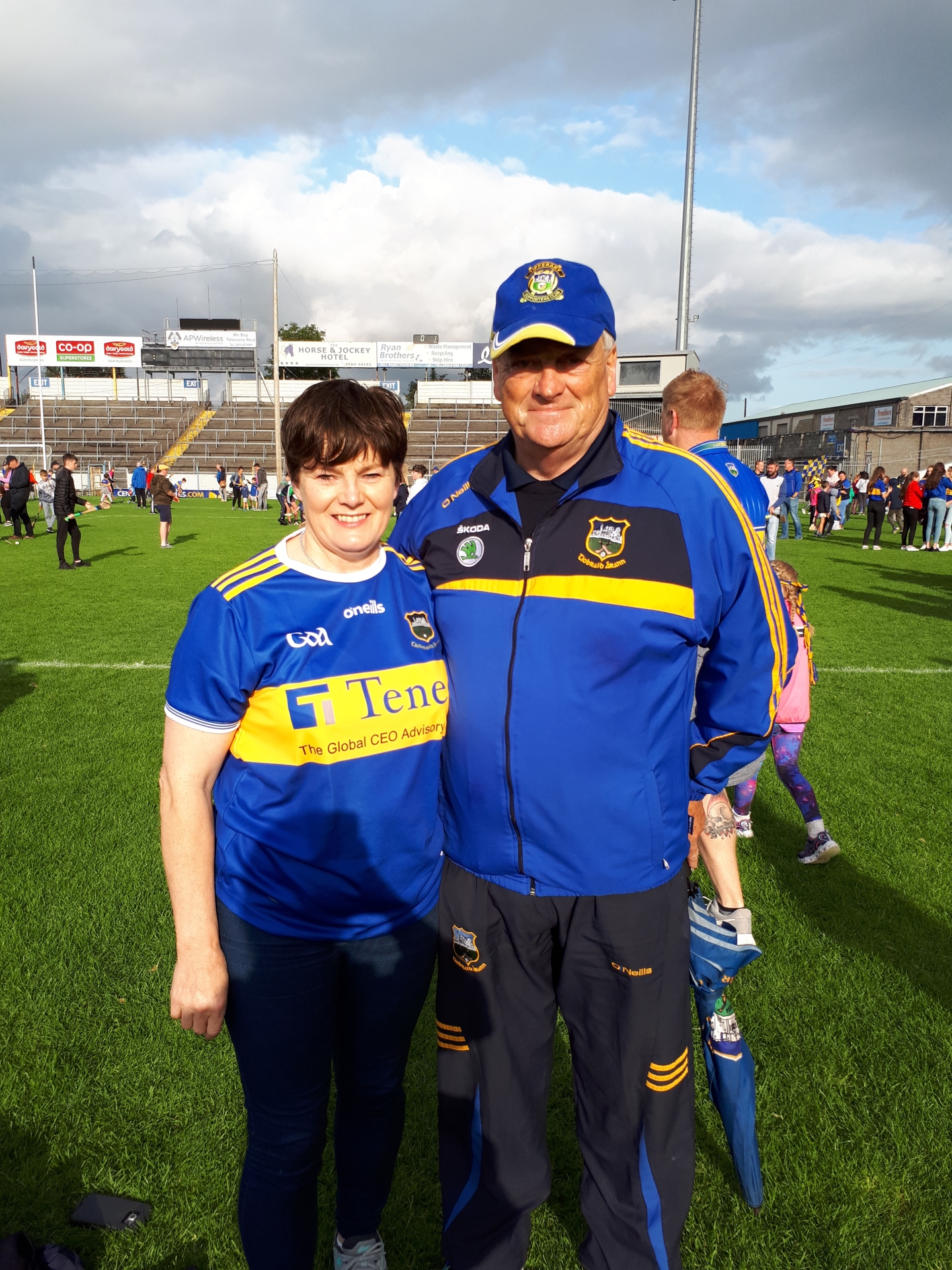 For Nuala Gleeson, Sunday night also marked an historic day for the proud grandmother after she accompanied her grandson Tomas Leahy to his first All Ireland final.

“And what a game it was. We’re all so proud of Tipp to beat Kilkenny in the way they did. It was fantastic. I never thought we’d win by 14 points,” she enthused. 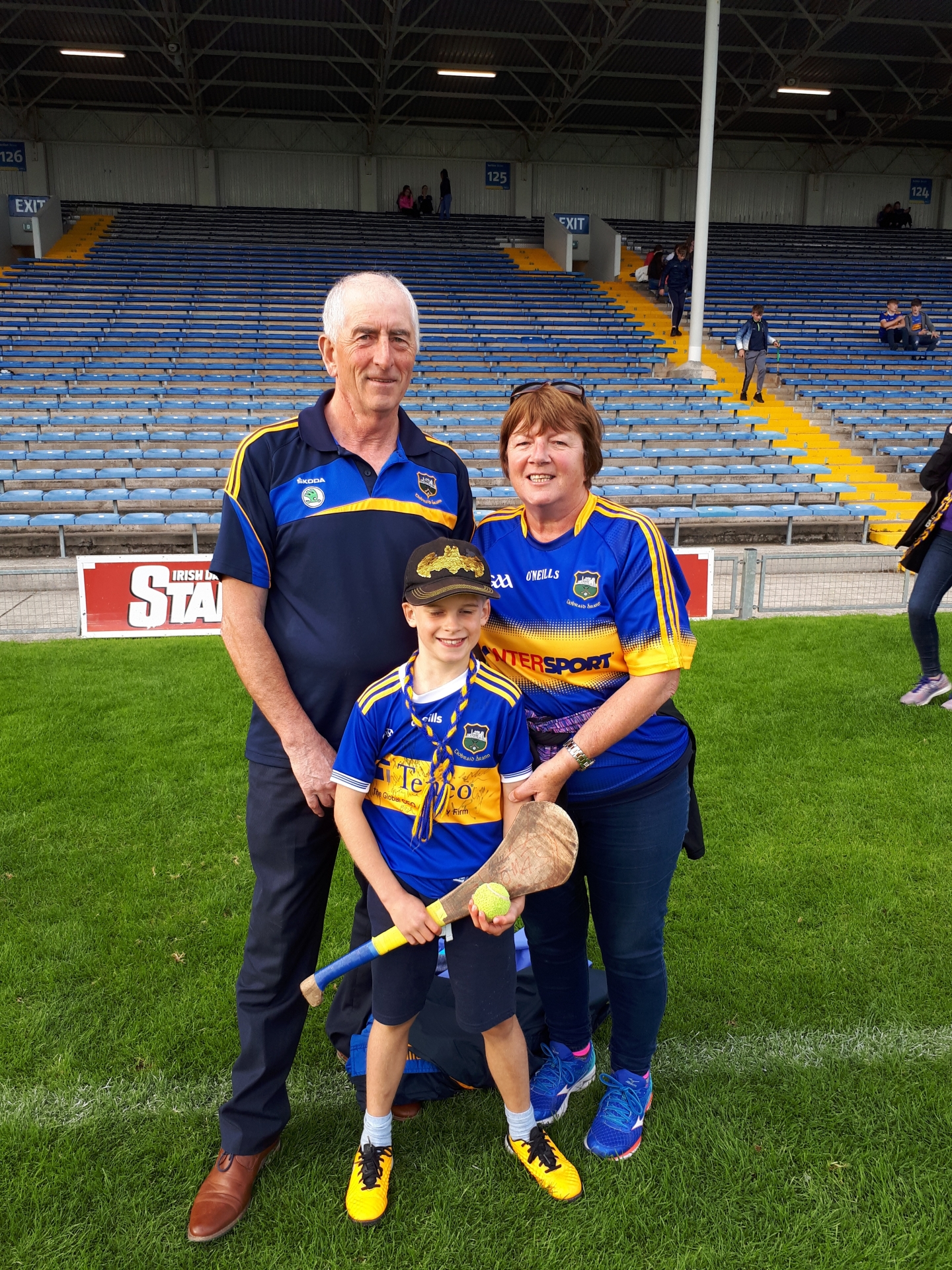 Nuala and Tom Gleeson from Crogue, Tipperary with their grandson Tomás Leahy

For Ballyporeen father and son Brian and Daniel Carey a trip to Semple on Monday evening to welcome Liam Sheedy's men home rounded off their perfect weekend.

“I always knew Tipp would win,” said six year old Daniel, who was busy practising his hurling skills while waiting for the team to arrive. 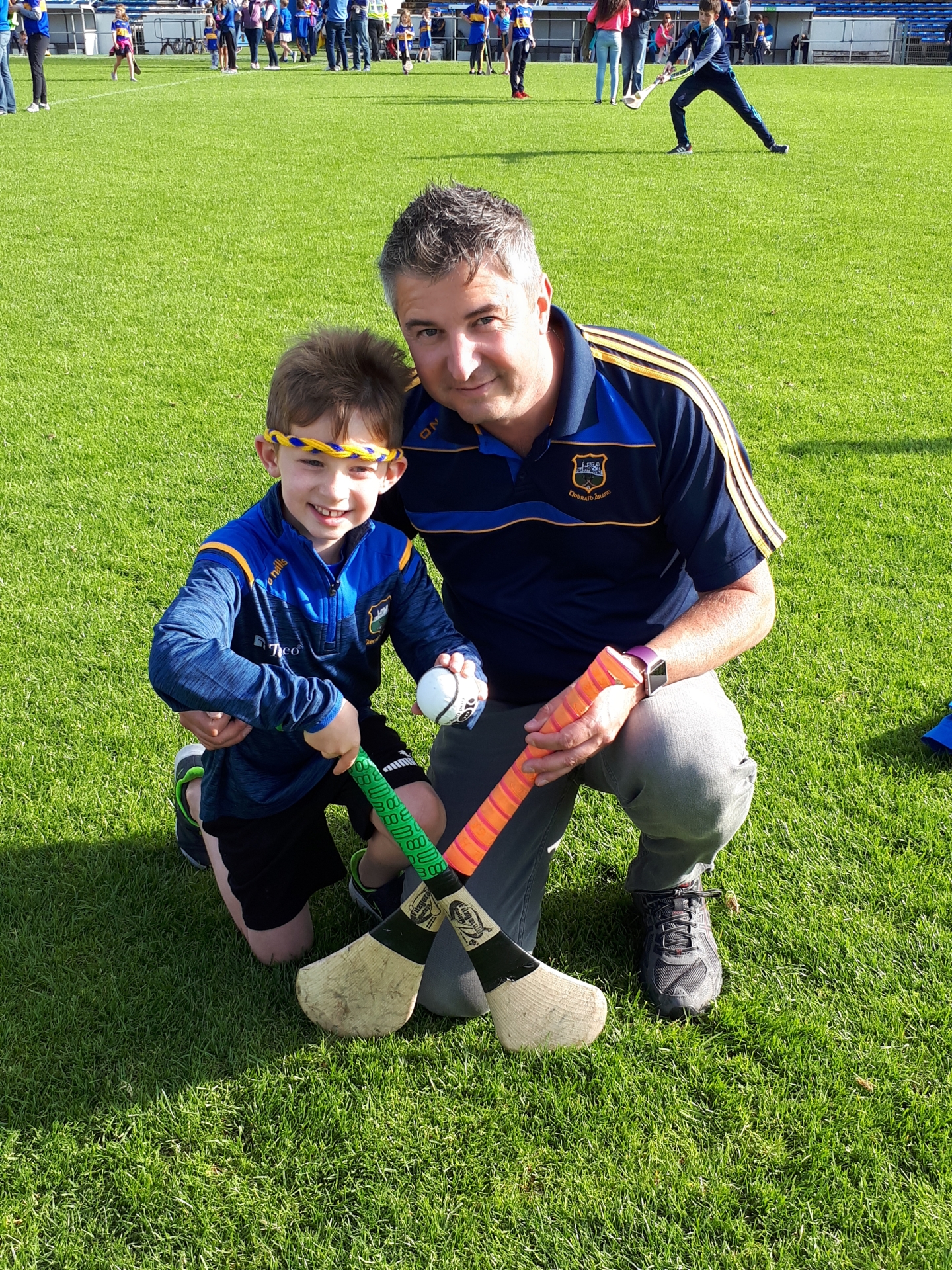 Assembled crowds in Thurles were entertained by homegrown Thurles band Seskin Lane who set the mood for a rapturous evening ahead.

Not to be outdone, it was the turn of The 2 Johnnies later on in the evening to momentarily steal the show performing a slew of their most popular hits before Liam Sheedy's men took to the stage in front of a euphoric Tipperary audience.

Chairman of the Tipperary County GAA Board, John Devane, described the team as 'history makers'.

“They are one of the greatest teams that have ever come out of Tipperary and we salute them all,”  he said.

One of the biggest cheers of the night occurred when Man of the Match Noel McGrath crossed the stage to lift the cup. 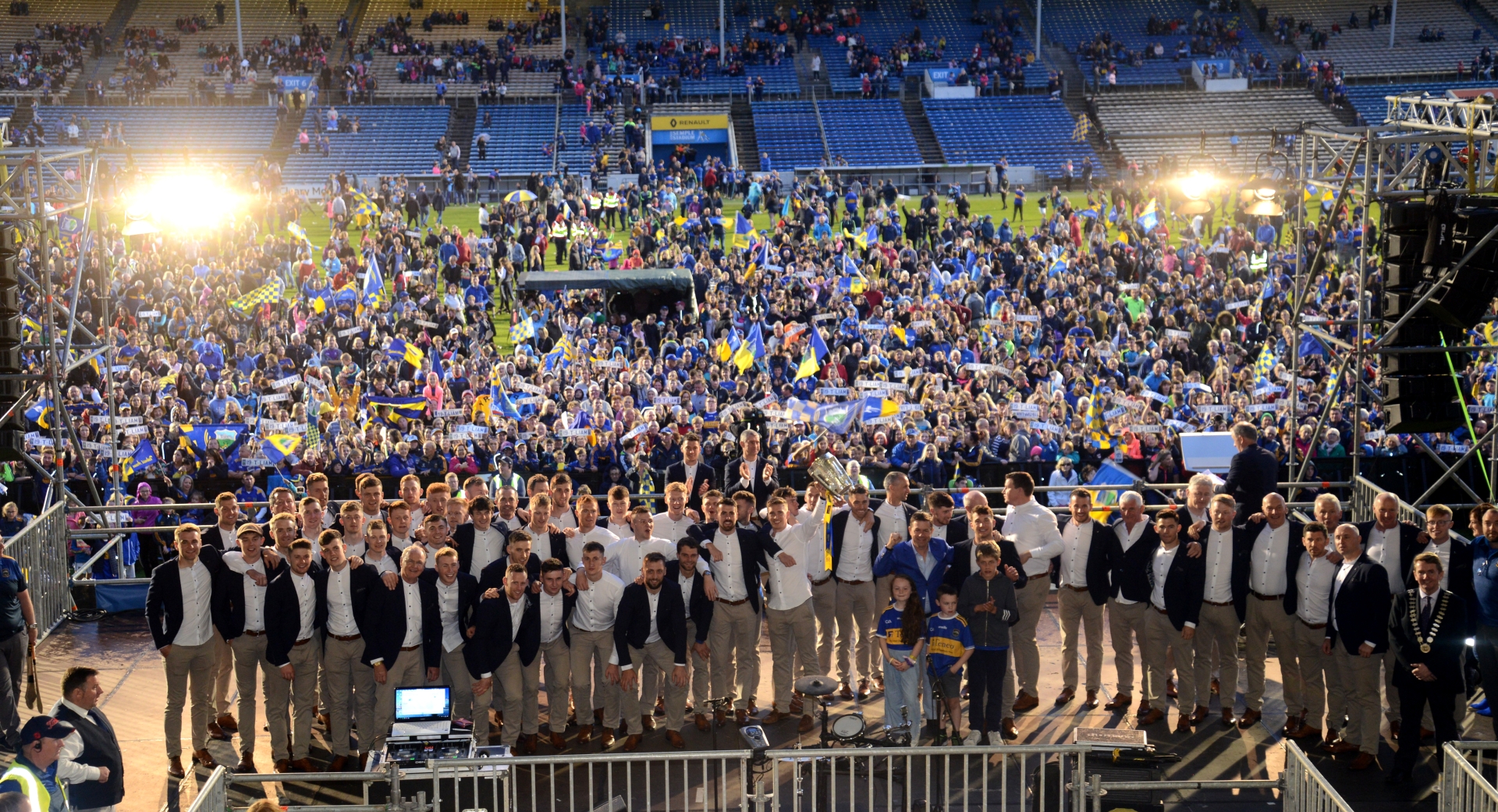 Captain Seamus Callanan also earned a roaring round of applause from the audience when he described the supporters as the "sixteenth man" in their victorious win on Sunday.

"I just want to thank ye so much on behalf of our panel. There's 40 guys here who really put their shoulders to the wheel from the start of the year and its an absolute privilege for me to stand here and talk on behalf of all the guys."

"We really want to thank you so much for coming out here to support us and ye really were the sixteenth man in Croke Park on Sunday and just to see the effort you've all made to come here tonight makes us so proud.

"I want to thank our backroom team. They put on a platform for us to perform. They left no stone unturned and without them this wouldn't be possible," he added.

Throughout the night extensive praise was heaped on the backroom team  made up of strength and conditioning coaches, nutritionists, doctors kit men, maor uisce, video analysts, the liaison and logistic managers, bus drivers, sponsor Teneo and least of all the extended Tipperary panel.

Dubbed the ‘Messiah of Portroe’ by Tipperary Cathaoirleah Michael Murphy, the audience burst into applause and cheers that could be heard many miles away from Thurles once Liam Sheedy took to the stage.

“This journey started for us back in the middle of November and it was a wonderful journey. I think every one of the 40 lads on the panel and the lads in the backroom team will treasure the memories they have from November 2018 right through to August 18, 2019,” he said.

“Stick with this team, because this is a team that mean business,” he continued  as the crowd began the familiar battle cry of Tipp, Tipp, Tipp.

“Last but not least, to you our supporters. You are magnificent. We love you, we thank you and we praise you.

More than 800,000 people reportedly tuned in to watch captain Seamus Callanan lift the Liam MacCarthy Cup on TV on Sunday evening, earning Tipperary their third senior title of the decade.

For full All Ireland coverage see this week's Tipperary Star and Nationalist, in shops Wednesday.