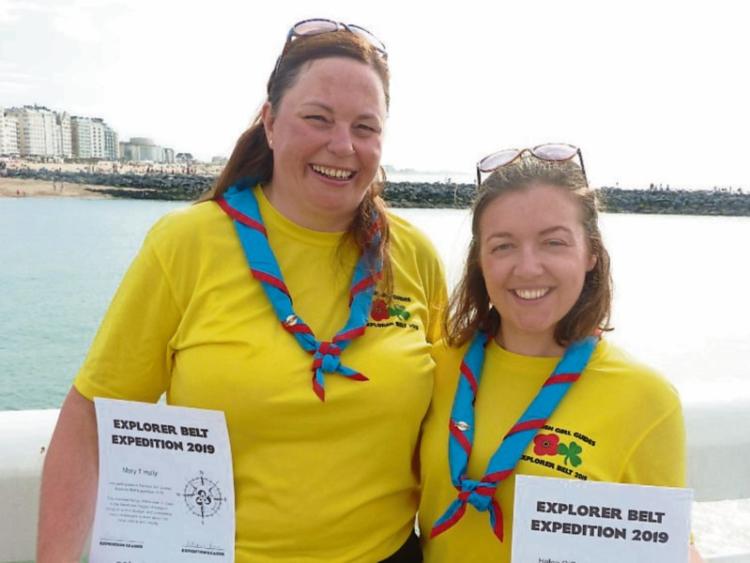 A Tipperary Guide Leader has reached the pinnacle of Guiding after hiking 180km in Belgium while carrying all her camping and cooking equipment, clothes, food and water and surviving on €3.25 a day

Mary Theresa Hally from Cashel and her teammate, Helen O’Reilly from Dublin, were among 12 Irish Girl Guides members to take on the Explorer Belt challenge, which is held every three or four years to test the skills young women have learned through their involvement in Guiding.

Participants had to keep a log book and complete a series of projects during their 10-day survival adventure in the Westhoek region. The projects involved finding out about the local culture, history and geography (without using a smartphone) and doing a service for the local community.

Their route took in many of the Flanders Fields historical battle sites as well as towns and countryside and a day at the seaside.

“It was a battle of perseverance, both mentally and physically, which I overcame with my own endurance,” said Mary Theresa. “It was humbling to rely on the kindness of strangers every evening when we needed to find a garden to camp in. We met many fantastic families along the way.”

Given the location of the challenge, Mary Theresa and Helen found themselves visiting various battle sites and reflecting on the First World War. They found the Island of Ireland Peace Park, a memorial to Irish soldiers who died, were wounded or went missing during World War I, particularly moving.

The biggest challenge of the 10-day survival adventure was mustering the necessary mental and physical endurance to keep going. “On the third day, we had to walk in the midst of a summer blizzard – rain and wind hitting us full force as we walked along an old railway line, which had been used during the war,” said Mary Theresa. “It was a challenge to keep focused as we walked single file into the wind whilst thinking of the thousands of men who had travelled the same route during the war. Thankfully, by lunchtime the sun dried up all the rain and we found peace in the doorway of an old church where we gathered ourselves for the rest of the journey.”

Did Mary Theresa feel like giving up at any point? “No, once I stepped off the bus nothing was going to stop me,” she said.

“Blisters did come but they were carefully treated. We met lovely families every evening who we chatted to about our experiences and it was good to remember the past.”

At the end of the 10-day trek, following assessments and interviews, Mary Theresa and Helen felt “amazed and over the moon” to be awarded Irish Girl Guides’ Explorer Belt, signifying the successful completion of the organisation’s toughest challenge.

“It was an honour to receive the belt and I look forward to sharing my experience with younger members and will encourage them to reach out and grab every opportunity that Irish Girl Guides gives them that will help in their future.”