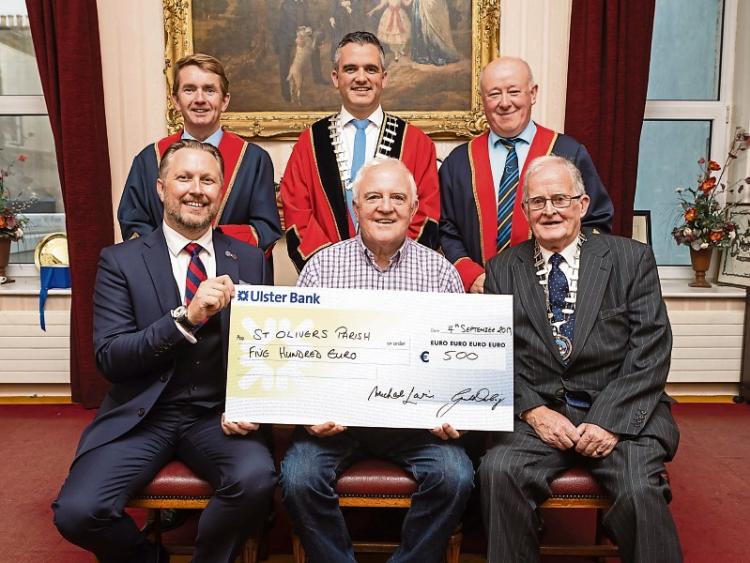 Members of the Clonmel Veteran, Vintage and Classic Car Club were honoured with a mayoral reception in the Town Hall in recognition of ten years of charity work, during which time they have raised almost €200,000 for local charities.

The club was formed in 2010 and some of the founding members are still active members, and were present at the ceremony.

Two honoured guests at the reception included Micheal Lavin, one of the founders and currently the club’s honorary member and president; and Grant Dowling, club chairman.

“The ethos of the club is based on two key principles; to promote the preservation, restoration and enjoyment of cars from a bygone age, and to use our hobby in ways which help others less fortunate than ourselves and raise money for local charities”, said Grant Dowling.

“It’s great that our members, both past and present, are being recognised for the time and effort they voluntarily give to raise money for local causes”, he said.

Mayor Garret Ahearn recognised the extraordinary work that club members have done for the local community through their donations to charity.

He also said that the club, through all of its events, makes a huge effort to champion the town of Clonmel, the county of Tipperary and local produce.

Cathaoirleach of Tipperary County Council, Cllr. Michael Murphy, is a long-standing and active member of the club.

He explained, “the club fundraises through various vintage car runs, rallies and events throughout each year but our main fundraising event is held over the May Bank Holiday weekend.

“This two-day event sees classic car enthusiasts from all over Ireland visit Clonmel for the weekend, many of whom stay overnight in local hotels and B&Bs. It consists of a scenic drive on the Saturday, where approximately 100 cars drive in convoy, enjoying the beautiful scenery that Tipperary has to offer.

“Upon our return we end the day with a dinner at the racecourse and a small party afterwards. On the Sunday the club holds a static car show in Powerstown Park Racecourse, with over 300 vintage and classic cars on display. This attracts hundreds more enthusiasts and families to Clonmel for the day so it really is a great event for the town”.

Grant Dowling stated “all throughout the weekend we promote local produce, including ham supplied by Oakpark Foods in Cahir and bread from Drohan’s, Clonmel. During our meal we serve apple juice from the Apple Farm, courtesy of the Traas family, and each participant on the run is given a goody bag full of local food and drink, along with small gifts supplied by local traders such as the Zip Yard in Clonmel, Glenpatrick’s Water and O’Donnells Crisps”.

Representatives of each charity that the club fundraised for this year also attended the ceremony and chairman Grant Dowling presented cheques to each, with €7,000 awarded to The Acquired Brain Injury Ireland; €500 awarded to Irish Guide Dogs for the Blind; €500 awarded to St. Oliver’s Parish; and €200 awarded to Cahir River Search and Rescue - a combined total of €8,200.

The Clonmel branch leader of Acquired Brain Injury Ireland, Evelyn Norton, explained that the money has enabled them to purchase a new wheelchair accessible van which will be used to transport patients from their 30 local families to attend the clinic for rehabilitation and social events, where they would otherwise be housebound.

Cllr. Richie Molloy explained how a charity very close to him, Family Carers Ireland, benefitted from the club’s work.

“I have seen first-hand the amount of work that goes into planning and running an event like the May show. The club members take so much time to fundraise for their selected charity and last year they raised €5,000 for Family Carers Ireland, which is of huge benefit to families who are looking after their loved ones all year and sometimes need a little extra support”.