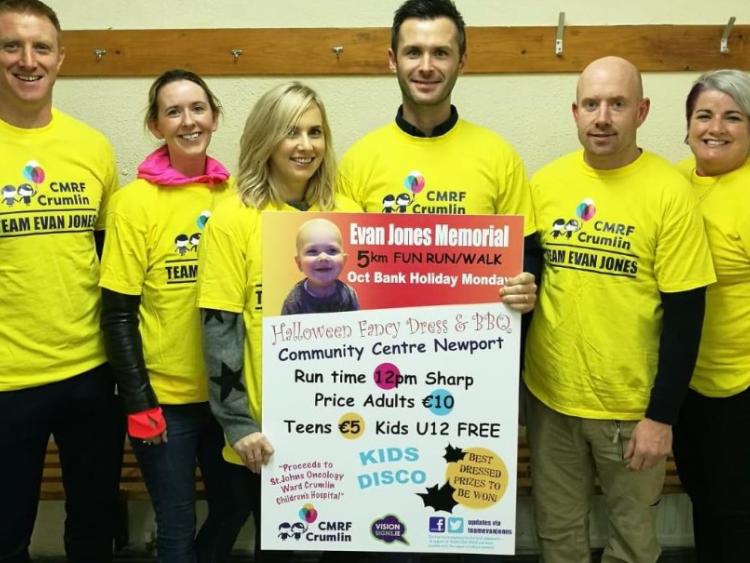 On Monday, October 28 the Newport Community will remember the life of one of its own, little Evan Jones, with one big final party involving a 5k fun run/walk, music, dancing, costumes, BBQs and lots of other celebrations.

Evan, who was two years and three months when he passed away in February 2017 from a very rare form of cancer, was the life and soul of the Jones’ home until the day he left this world.

He was a hero in the Newport Community and to honour his short life, his parents and the members of the Team Evan Jones’ committee have decided to go out with a bang with one final fundraising event.

This year’s theme is all about heroes and it is expected that the community of Newport and beyond will come out in force, as they have done the last few years, to help raise as much money as possible for local and national charities.

“As this is our last year doing the fun run we want it to be very special. Evan was everyone’s hero so we thought it apt to use the hero theme this year,” shared Paddy, Evan’s dad who hails from Newport.

The beneficiaries of this year’s fundraising efforts will go to the St. John’s Oncology Ward in Crumlin, The Gavin Glynn Foundation and The Kevin Bourke Treatment Fund, a local campaign set up to help another Newport resident going through cancer.

The Gavin Glynn Foundation was instrumental in helping the Jones’ family in the fight for their son’s life. The charity has links to hospitals across America and other counties and Evan’s charts were sent across the world for other professional doctors to assess to see if they could do anything.

“After Evan passed away we felt very strongly about keeping his legacy alive. Now three years later having helped raise funds for some amazing charities along the way, we feel the time is right to end the Memorial Walk on a high,” shared Marisa, Evan’s mom, who hails from Athlone.

“Evan thought us how to be strong in the face of adversity, to always have hope and faith, to keep looking forward and to smile as you go. But most of all Evan brought a community of people together and showed each and every one of us that no matter what happens in life, there is always a village of people who are there for you.”

This year’s event, taking place on the October Bank Holiday Monday, is expected to be the biggest event yet with the big run, prizes for the best dressed, auctions (including a signed Tipp Jersey), and one hell of a party. The Liam McCarthy cup will also make an appearance and some of our All Ireland Hurling champions will be on hand to meet and greet everyone.

There will also be a monster raffle (tickets can be purchased from the committee or locally in the Corner House Takeaway or in North Tipp Motor Factors).

First prize is an overnight stay in the plush five star Marker Hotel in Dublin. Second prize is a 49 inch Smart TV, third place winners will receive a 500 litres of home heating oil from Cosgrave Oil, fourth place will get a Four Ball Golf in Carton House and the fifth prize is a Nespresso Coffee Machine.

If you are unable to make it but would like to donate you can do so at the Mulcair Credit Union Newport , account name “Team Evan Jones.”

Marisa and Paddy live in Newport with their other beautiful sons, Ben and Rian.