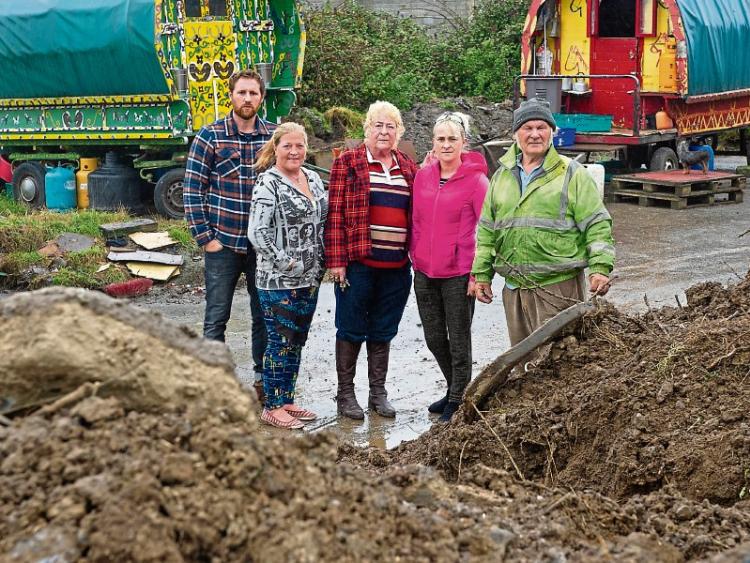 Jack Griffin, Bridget O'Reilly, her mother Helen, sister Ellen and father Willie pictured in front of the large mounds of mud dumped in front of Helen and Willie's home

An advocacy group for Tipperary's Traveller community has condemned the dumping of a large quantity of mud along a Cashel sliproad where an elderly couple lives in an unofficial campsite.

Jack Griffin of the Tipperary Rural Travellers Project described the dumping of truck loads of mud along a green area just feet away from Helen and Willie O'Reilly's caravan as an "aggressive and hostile" action by the Council.

Mr Griffin and the O'Reilly family have called on the Council to remove the mud from the slip road next to the Circle K Service Station because they claim it's posing a health and safety threat by increasing the risk of flooding along the road and making already difficulty living conditions on the site intolerable.

The Co. Council, meanwhile, has defended its action pointing out that the it took this step to prevent any further illegal encampment on this unauthorised camp site that it considers is unsuitable for residential units.

The local authority said it gave residents on the site an opportunity to move their units to the opposite end of the site close to an access point but they refused this offer.

The Council insists it has made every effort to engage with the families on the unauthorised site to address their housing needs but contends they are limiting their housing options by refusing to take up occupancy at a halting site or in standard housing.

The mud covers a long stretch of the encampment and has been dumped on what was previously a grass area where Helen and Willie O'Reilly's grandchildren used to play.

Ellen Harty, daughter of Helen and Willie O'Reilly, said the Council came  and dumped truck loads of mud over a long stretch of the slip road on October 1, the day she and her six children moved out of the site to move to their new council house home elsewhere in Cashel.

She lived at the campsite for seven and a half years and after failing to secure water, toilet and electricity services at the site she applied for a council house in the best interests of her children.

Ellen, who is a widow, points out that her parents have also lived at the campsite about seven and a half years and have always camped in this area of Cashel.  Her father has lived in a barrel top wagon his whole life and kept the traditional ways of the Traveller people.

She is concerned for her parents' health since the mud was dumped outside their wagon.

"My father is aged 73 and my mother is 64 and both have health issues. I am concerned for their wellbeing. I am concerned about them falling in the mud. The Council should be ashamed of what they are doing to elderly people. This is 2019, not the Famine times."

She is also concerned about the increased risk of flooding on the sliproad because of the mud.

Her mother Helen said the area outside their caravan was flooded for two to three days two weeks ago after heavy rainfall.

"The flood came right up to our door. We were blocked in and couldn't get out," she told The Nationalist.

Since that incident, the Council has dug some trenches through the mounds of mud to allow water run out.

But the family are still fearful as the sliproad was already prone to flooding before the mud was dumped there.

Many of Helen and Willie's relatives live in the nearby Waller's Lot Halting Site. When asked if they would move there, they said they preferred to do their own thing and besides the halting site was already overcrowded.

The Tipperary Rural Travellers Project is angry the Council didn't consult with the family, their community or the project before taking this action.

Jack Griffin said the Project was "absolutely shocked" at the Council's actions.

If the Council had concerns about other people moving in to the campsite, there were channels of communication it could have used to raise these concerns rather than covering the area in mud almost overnight.

"We would see this as a very hostile and aggressive move without any discussion.  It literally happened the day their daughter moved out. That family have been living in the area a long time."

He points out the slip road looks unsightly since the dumping of the mud and with months of bad winter weather ahead the condition of the site is only going to get worse.

He suggests the Council should instead have done something positive to improve the area's appearance.

He said the facilities at the campsite need to be improved so Helen and Willie O'Reilly can live there in dignity. They were an elderly traveller couple who lived in the traditional way.

He contended there wasn't alternative accommodation for them at the moment as the halting site was full and it had taken years for them to get Ellen and her children out of the campsite.

Tipperary Co. Council issued a statement responding to the criticism and issues raised by Jack  Griffin of the Tipperary Rural Travellers Project  and the O'Reilly family.

The Council said there were a number of accommodation issues at the unauthorised Circle K  site and Waller's Lot Group Housing Scheme and the Council has been working with Tipperary Rural Travellers Project and the occupants of the unauthorised site to address these issues.

The Council said it should be noted that an allocation of a property was recently made to a family from the unauthorised site at Circle K.

"It was agreed as part of the allocation process that the unit inhabited by this family at the unauthorised site at Circle K would be removed and that steps would be taken to ensure that no additional illegal unit would be placed on the site.

"This decision was made having regard to health & safety and road safety issues as the site is unsuitable for residential units given its proximity to a large commercial premises, a busy road and the lack of basic facilities.

"The Council gave the other residents on the site an opportunity to move their units to the opposite end of the site close to an access point but they refused this offer.

"In order to ensure that no additional unit was placed on this unauthorised site, the council then took steps to prevent access to the site," the statement continued.

The statement added that the issue of subsequent flooding at the site has been addressed by the Council.

"It should be noted that the Council has made every effort to engage with the families on the unauthorised site to address their housing needs but they are limiting their housing options by refusing to take up occupancy at a halting site or in standard housing," the statement concluded.