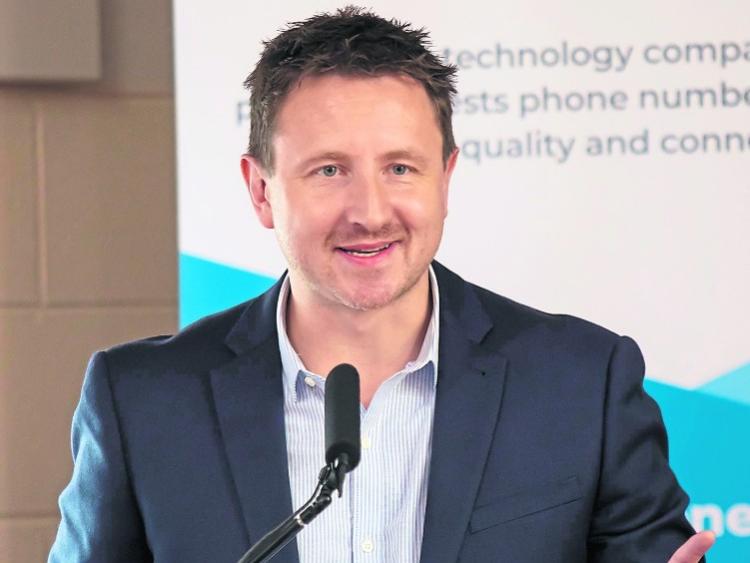 A Moyne native, who has just announced a major expansion of his business in Waterford, has singled out former Principal of Cólaiste Mhuire in Thurles for special praise, having engendered in him a love of computers.

Liam Dunne, Chief Commercial Officer at Spearline Waterford in the Arclabs Research and Innovation Centre said:
“I am delighted to announce that we are expanding our team here in Waterford by 24 new members. Spearline has grown by over 600% in the past four years and we plan to continue investing in the local economy by creating employment into the future. I am one of 11 WIT graduates on the Spearline team; we have six Commercial Software Development graduates. I am honoured to represent Spearline in Waterford and to have the opportunity to grow our base - both in terms of international customers and team members.”
Liam is originally from Moyneard, Moyne and attended Coláiste Mhuire Co-Ed in Thurles which he credits with sparking his interest in computers leading to a Degree in Software Development.

Speaking at the launch Liam states: “None of these achievements would have been possible today unless I stepped foot into the Computer Lab in Coláiste Mhuire Co-Ed with Tony O' Brien back in the day. My love of computers was ignited from what I learned in secondary school in Thurles.”

Professor Willie Donnelly, President of Waterford Institute of Technology (WIT), officially opened Spearline’s Waterford office in ArcLabs Research & Innovation Centre, Co Waterford and on the same day the tech company announced 24 new jobs and an expansion which represents an investment of €2.9m over two years.
The event was moderated by Kevin Buckley, Co-Founder and CEO at Spearline who said: “We believe in staying true to our roots by creating employment in our localities. On August 9, we officially opened our new headquarters in Skibbereen in a building where I was once a pupil. We are here today in a building owned by WIT, the alma mater of many Spearliners. We hope to add to that number and plan to continue to do so into the future. It fills us with pride to be here today in Waterford as we continue to expand Spearline.”
Speaking at the official opening, Cllr John Pratt, Mayor of the City and County of Waterford said: “I want to congratulate Liam Dunne, his leadership and entrepreneurial talent in developing a service that will add to the quality control of an industry that already supports a large number of jobs here in Waterford, while adding their own quality jobs on top of that. This positions Waterford as a global focal-point in telecommunication support and sales.”
John Halligan TD, Minister of State for Training, Skills, Innovation, Research and Development was also in attendance at the event.
Spearline is a technology company that proactively monitors phone numbers for audio quality and connectivity globally. It is headquartered in Skibbereen, Co Cork and has offices in Waterford, Romania and India. The Spearline platform enables enterprises and telecommunications service providers to test connectivity and quality on global telecoms networks, testing automatically at volume. Spearline has conducted millions of test calls worldwide, resulting in billions of data-points. It has global network coverage and operates a 24 hours per day, 365 days per year support service for its international customers.