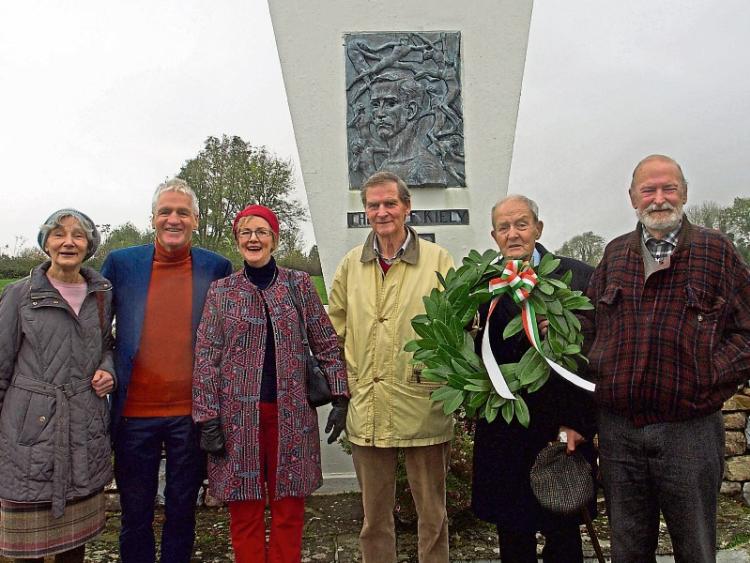 Ireland's first Olympic gold medallist, Thomas Francis Kiely, was remembered fondly as an athletics hero of great physical strength and stamina but also humility at a celebration in his native Ballyneale on Sunday to mark the 150th anniversary of his birth.

The people of Ballyneale and the Champion Kiely's descendants gathered at St Mary's Church on Sunday morning for the anniversary Mass celebrated by Fr Jimmy Browne, which was followed by the laying of wreath at the monument erected in his memory opposite the church.

Fr Browne said Thomas F Kiely was probably Ireland's greatest athlete and it was right and fitting that the community remember and honour him. The Mass not only marked the 150th year of the Olympic champion's birth, itwas celebrated just two days before the 68th anniversary of his death on November 5, 1951.

Eight time masters athletics world champion Joe Gough said he was honoured to be invited to lay the wreath at the Champion Kiely monument where he recalled his hero's Herculean achievement in winning the All-Round athletics contest, now called the decathlon, at the 1904 Olympic Games in St Louis in the US.

The Owning based middle distance runner, who was voted World Masters Athlete of the Year this year, recounted how Thomas Kiely funded his journey to the Olympics by selling a lot of his athletics prizes and while Ireland was still under British rule he insisted on competing for his native land.

"He could have been on the British or US teams. They wanted him and they would have paid for him but he stuck to his guns and wore the shamrock on his vest in St Louis," Mr Gough told the large crowd gathered at the wreath laying ceremony.

Mr Gough recalled the day Thomas Kiely competed in the All Round contest was a wet, dirty, windy day and he had to compete in all 10 events in the one day, the last of which was the mile race. "It would kill most people to do it but he ran it in about five minutes. It was a fantastic achievement."  It was the first Olympics that gold, silver and bronze medals were awarded

Mr Gough marvelled at the Champion Kely's strength, stamina and technical ability in competing in the All-Round contest. He wasn't just running around a field or road, he was competing in very technical athletics events like the hurdles, shot put, race walking,  hop step and jump and long jump.

And he noted this was at a time when there were probably no specially made hurdles and his training in the throwing event was probably throwing big stones around his farm.

Mr Gough surmised Mr Kiely didn't have the supports of a coach, physiotherapist, nutritionist or manager that modern athletes have. He probably trained on his own with the Davin brothers in Carrick-on-Suir.  He must have been also been great organiser and manager because he was running a farm while also competing in athletics.

The Dungarvan born runner recounted plucking up the courage to approach the 2016 Olympic decathlon champion Ethan Ashton at the World Indoor Masters Track & Field championships in the America and told him that the first man to win the modern Olympics decathlon gold medal came from near where he lived.

Mr Gough described Thomas Kiely's Olympic gold medal win was a "brilliant story" and it was important to keep his name alive in events like the Champion Kiely 5km run so the children of Ballyneale know about his achievements.  People needed heroes to look up to and be inspired by.

Thomas F. Kiely's grandson Anthony Kiely said some 20 years ago he tried to find out why his grandfather hadn't been included on the list of Irish Olympic heroes. (He is now officially recognised by the Olympic Council of Ireland).

Anthony said he spoke to Olympic hammer thrower Dave Guiney, who knew his grandfather, and he told him the people who pulled the strings didn't have any interest in old athletes but also his grandfather was his own worst enemy as regards seeking recognition.

"All he wanted was to retire to his farm. He was a humble man; he let his achievements speak for him.” Mr Kiely explained.

"I admire him as much for that as for his achievements. It's often we get people who achieve fame in different walks of life but they become obnoxious. A bit of humility is a nice thing.

“I would say my grandfather had that down through his life and as a result, he just faded into the background. He recognised that God gave him a wonderful talent but he didn't blow about it."

On behalf of his family, Mr Kiely thanked the people of Ballyneale and the Carrick-on-Suir area marking the  150th anniversary and thanked Joe Gough for his oration.