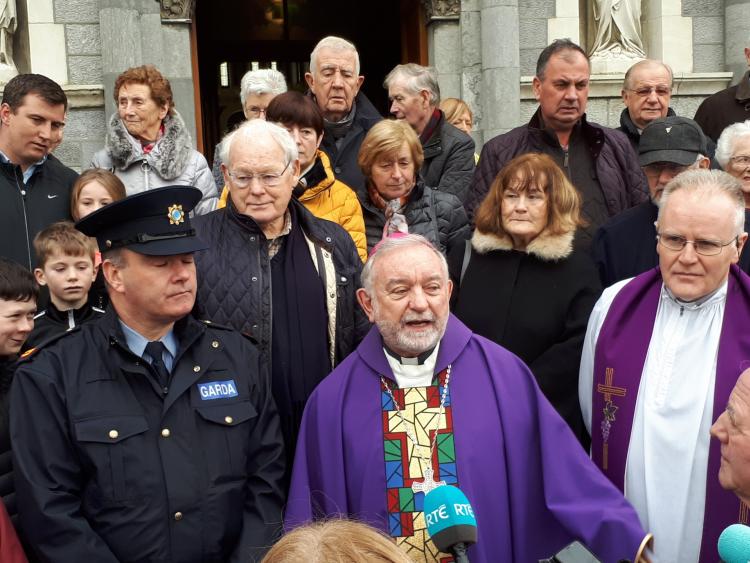 Archbishop Kieran O'Reilly speaking to the people after Mass this morning

Archbishop Kieran was soeaking at 10:30am Mass this morning in the Cathedral of the Assumption

Archbishop Kieran O'Reilly has made an impassioned plea for information in helping to recover the stolen head of the Archbishop Leahy statue which is situated in the Cathedral of the Assumption grounds in Thurles.

The statue, which has been in situ since 1911, had the head cut off and stolen on June 25/26 and though An Garda Siochana have conducted extensive investigations, no motives or leads have been discovered so far.

Inspector James White attended the 10:30am Mass and addressed the congregation appealing for any assistance which can be rendered at this stage. He urged people who may know something about the very hurtful incident to report to An Garda Siochana in confidence through the Garda Confidential Line  1800 666 111.

Archbishop Kieran, who was surrounded by concerned parishioners, described the act as being 'an affront to the people of the Archdiocese' and he went on to outline the hurt and pain exerienced by locals at such an act. Noting that today is the first Sunday of Advent and the first day of Christmas as far as athe Church is concerned, he spoke of his desire to see a world without evil and one where peace can reign in the hearts of all, free from war and strife.

The statue is of Archbishop Patrick Leahy who was responsible for the building of the Cathedral of the Assumption. It is currenty closed off with a timber box while an outcome of the investigations is pending.

Anyone who has any information is pleased asked to come forward immediately. A reward is being offered by locals.

Any information can be passed on the Gardai, or to local media if needs be.