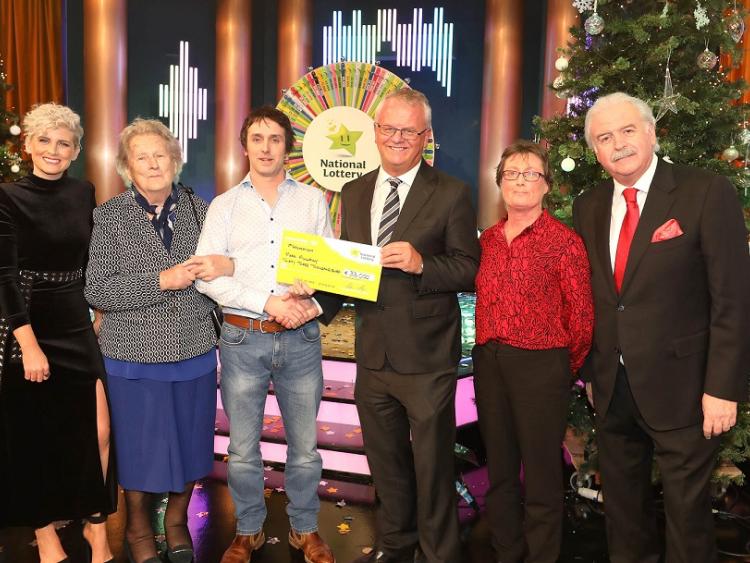 A tiler from Tipperary is delighted after winning a cool €33,000 when he appeared on the National Lottery TV game show Winning Streak last Saturday, December 7.

Mark Mullally from Mullinahone, Co. Tipperary won a Renault Zoe electric car, worth €25,000 and won a further €8,000 in cash from the game show on RTÉ One.

On the show, Mark spoke of how only the week before, he was looking forward to a quiet night in by himself where he could watch a movie, as his wife Mary was out on her Christmas Party. He had just settled his two daughters Stella (6) and May (5) into bed for the night when his phone started to ring and the text messages came through with everyone saying the same thing… ‘Was it you who was pulled out of the Winning Streak drum?’ His quiet night in had definitely been ruined!

While all of the commotion was going on, Mary, his wife of 11 years, called to check how everything was. He told her about his Winning Streak luck and she jumped straight into a cab and went straight home as the couple could barely believe their luck.

Their two daughters were more excited about seeing their dad on TV last week than Mark was about going on the show! Mark comes from a large family himself and he is the youngest of ten siblings. Originally from Glenmore in Co. Kilkenny, he moved to Mullinahone 15 years ago to be with Mary, who grew up in the town. His own parents, Tommy and Essie were cheering their son on from home in Glenmore.

A tiler by trade, Mark is well known in the town having worked as a tiler for more than 20 years and is kept busy with his business – Mark Mullally Tiling. In his spare time he is a GAA fan, having played a lot of hurling in his younger days, and also likes cycling, running and plays the odd round of golf to stay active.

Winning Streak is off air for the Christmas break and will return to RTÉ One on Saturday, January 11, 2020. The National Lottery game show is co-presented by Marty Whelan and Sinead Kennedy and features some perennial favourite games including Play or Pay, Roll for Riches, WinFall and Electric Dream – where one player will win an electric car worth €25,000.

As ever one of the lucky five players will get the chance to spin the wheel and win up to €500,000. An exciting element of the show is that one €100,000 segment will be added to the Grand Prize Wheel every show if less than that amount was won in the previous show, improving players chances to win a massive prize.