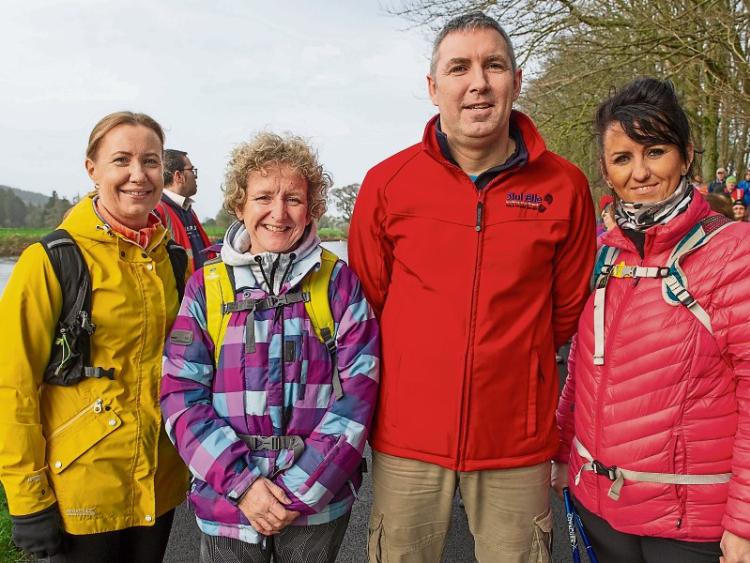 Ber Nugent, Martina Cliffe, Liam Fleming, CEO and founder of Siúl Eile and Geraldine Morrissey at the start of the Kilsheelan to Clonmel walk on Sunday, February 2

On a recent Sunday morning, 150 walkers gathered at the Blueway in Kilsheelan for an invigorating hike along the riverbank to Clonmel organised by the Siúl Eile social walking movement that is in line this month for a national award for its work in getting thousands of people across Co. Tipperary out exercising in the fresh air.

This  hike along part of the East Munster Way is one of  Siúl Eile’s  Trail Walking series that brings hikers along sections of three of the national way marked trails that pass through Co. Tipperary.

The huge popularity of the  Siúl Eile network of walking groups has earned the social enterprise a finalist place in   Best Community Health Initiative category of the All-Ireland Community & Council Awards  that will be announced at a ceremony in Croke Park this Saturday, February 15.

Siúl Eile founder Liam Fleming from Clogheen says he is delighted and amazed   with the award nomination and the  growth of Siul Eile groups around the county.

The life coach and father-of-five set up the first Siúl Eile walking programme in Clogheen in 2016. It was a 12-week series of social summer time hikes in the scenic surroundings of the Knockmealdown and Galtee Mountains and Vee Valley.

The walks were billed as the Couch to Mountain Top walks and were  targeted at people with low fitness level. They s started off with doing rounds of the local GAA pitch and graduallygot more challenging with Liam building in  hills  as the participants' fitness levels improved.

“The aim was to bring local people out to show them what was on their door step. Very few people had been up the mountains but there are hundreds  of walks around Clogheen. At the end of the 12 weeks we went up to Galtee Mór. There was a great response to the programme,” he recalls.

Due to the success of the Couch to Mountains walks, Liam was invited by Tipperary Co. Council Sports Partnership, which  promotes recreational sport in the county, to do a Bnest Social Enterprise course at the University of Limerick.

After completing the six month course,  Tipperary Sports Partnership  helped Liam  to set up Siúl Eile walking groups in other communities around the county.

“We now have 13 Siúl Eile groups all doing different walking programmes, “ says Liam. “When we initiate a programme, it can be a bit slow to take off at first. We don’t go in with any great fanfare and start with handy numbers and soon you have up to 60 walkers coming out.”

Liam co-ordinates the walks, which are run and led by volunteers in all the participating communities. Most Siúl Eile walks are free of charge for participants. The  Kilsheelan to Clonmel walk on Sunday is one of the few with an entry fee  to cover the cost of bus transport from Clonmel to Kilsheelan.

“We run 20 walks per week between all the groups. You are looking at about 500 people out walking in Siúl Eile walks weekly. We vary the walks so people are doing a different walk every night.”

Some groups host two to three to three walks a week either in the evenings or at weekends. The How’s She Cutting night-time walks have been very popular over the dark winter months. Liam said these walks last one hour and take place on quiet rural roads. The Community Hall Crawl walks are another  series that ran over 12 weeks.

Liam says the Siúl Eile walks were started as a way to get people fit and enjoy the countryside  but  the opportunity they offer  to socialise with friends and neighbours   is  just as important an attraction.

“Most people come initially for the health benefits but it's actually the social side that keeps them coming.”

The next hill to climb for Siúl Eile will be to set up walking groups  in neighbouring counties.

“We hope to expand outside of Tipperary,” says Liam. “ We have people interested in Cork, Limerick and Waterford. What started out as a single walking programme has  taken on a life of its own.”