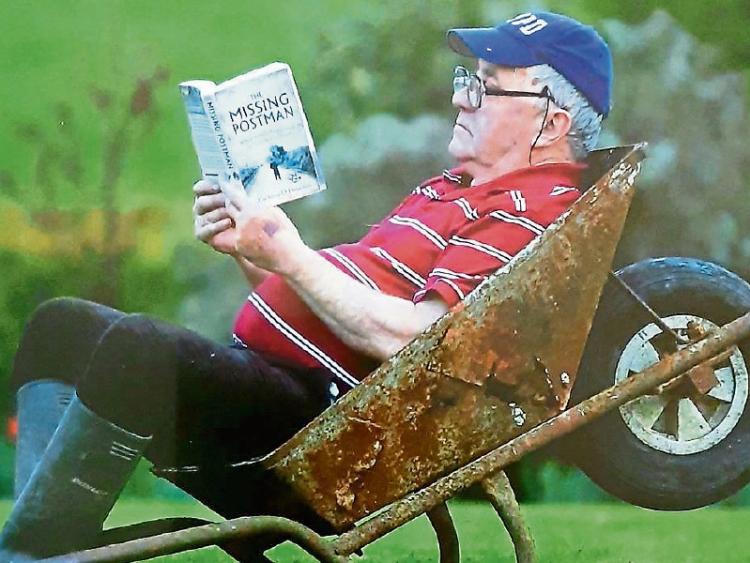 The Clonmel Writers Group was founded in 1988 by Paddy Phelan of Ballymacarbry.   The group met every second Wednesday in the library to discuss their various poems and prose pieces.

They then published the first collection of their writing and called it  The Write Words.   Paddy’s piece in it was called Parking and it was extremely witty.

By the time I joined the group, they had left the library and moved from rooms in bars to Resource Centres, but did not acquire a permanent home until finally Clonmel had its own Arts Centre.

From there, Paddy and the group ran annual literary festivals like the South Tipperary Writing Festival and the Impressions Festival.

Seamus Hosey recorded one of our sessions for RTE Radio One and it featured on the Arts Show.

The one guest Paddy got really excited about was Robert Fisk, the Middle-East Correspondent.  The White Memorial Theatre sold out in the space of a day for his lecture.

We had one incident with a guest and if I say it was Shane McGowan, you won’t be surprised.

We were astonished that he agreed to take part in our festival and the tickets were sold out immediately.

Paddy and I had the long and difficult task of persuading Shane to leave Hearn’s Hotel (after  five pints!) to walk the few yards to the Arts Centre where a huge crowd was waiting.

We managed it in the end, without Paddy’s suggestion of announcing that there was a bomb in the hotel.

Paddy’s own writing moved between the political to the comical.   He won many prizes for limericks and prose pieces.

He had letters on many subjects published in newspapers but he would not tell us most of the time.

He might say “Did you read The Examiner on such a day” at a meeting and we would see one of his letters later in that newspaper.

He won the prestigious Percy French Prize for Witty Verse in Strokestown one year.   I only happen to know because I was there!

When he brought copies of a published piece of his to a meeting in February last, we knew it must be something special.   It certainly was!

It featured a photo of his beloved German Shepherd dog Blackie in the Sunday Independent followed by a piece supposedly written by  Blackie.   It was very clever and very funny and concluded with the words “I have to go now.   I hear a strange car coming.”

On a personal level, I will miss 25 years of monthly meetings, many, many phone chats, exchanging a bottle of brandy for Mary’s Christmas Cake each year, his jokes about Kerry people (I am one) trips to various writing events all over Ireland, Listowel Writers Festival every year , tea and scones in the Park Hotel and that roguish witty laugh.

Paddy reposed at Drohan’s Funeral Home, Dungarvan on  January 18, 2020, where large numbers came to pay their respects to his bereaved family.

Later on Saturday evening, a Celebration of his Life took place in Ballymacarbry Community Centre, with family, relatives , neighbours and friends, who joined in a night of reminiscing, stories, music and song.

This queue is long and winding

It has been there for ever;

We take our place when born

And drop out at Death’s pleasure.

Nobody can escape this queue

Its part of Nature’s plan;

The wealthy men who rule the Earth

Walk with the poorest man.

Some people drop out early

Just of their own volition;

We all would do the very same

If faced with their position.

Most people have a busy life

They work for short-time gain;

It helps to keep them sane.

We get in the queue with nothing

We take nothing when we leave;

Those who stay behind us

Will say goodbye and grieve.

Then they will wait their turn

In the queue they keep their place;

Each and every generation

Needs that little bit of space.

The literary talent and legacy  in the family is continued by both his first cousin Paddy Phelan, Shanballyanne well known for his poetry in the Nire and by his nephew,  Dublin based writer James Phelan  who is best known for his work on Wrecking the Rising, TG4's three part historical time-travel comedy drama which aired in 2016.

James in turn received the award for Best Script Drama at the 2017 IFTA Film & Drama awards.

He is also the creator of the RTE drama Striking Out starring Amy Huberman, which was produced by Blinder Films and Acorn TV.

His other works include TG4's seven-part comedy series Galway Races, which debuted in 2009.

The series itself won an IFTA, and saw James pick up a nomination for ‘Best Script Television’ that same year.